Food security and climate change, the pressing reality of Mozambique

Brochures and Factsheets Climate action Climate change adaptation Climate and food security analyses Resilience building Country Capacity Strengthening Disaster risk reduction Sustainable livelihoods and ecosystems Mozambique
In 2019, Mozambique was the most affected country world-wide by the impacts of extreme weather events. WFP has invested in a growing body of evidence on the impact of climate change in Mozambique.

In 2019, Mozambique was the most affected country world-wide by the impacts of extreme weather events. While the country only contributes 0.1 - 0.2 percent to global emission, Mozambique is the 38th most vulnerable and the 13th least ready country to address the effects of climate change.

Historical trends indicate there is a strong relationship between food insecurity and exposure to climate hazards. As 70 percent of the population depend on climate-sensitive agricultural production for their food and livelihoods, increased frequency and intensity of storms, droughts and floods are likely to pose pressure on agricultural income undermining 25 percent of the country’s economy, 70 percent of livelihoods, as well as the food and nutrition security of the whole country.

WFP has invested in a growing body of evidence on the impact of climate change in Mozambique. Three pieces of evidence have been published:

3. Climate Projections, as part of the UK Met Office/WFP Joint Report “Food security and livelihoods under a changing climate in Mozambique - Preparing for the Future”.

Through these pieces of analysis, WFP makes available information to understand the country’s experienced climate and weather; identify the prevailing vulnerabilities; recognize the key hazards (and their relationship to vulnerabilities); project these complex relationships into the future; and, support the prioritization of actions, including livelihoods, geographies, hazards, etc.

Based on these, WFP has partnered with the Government of Mozambique to develop tools and systems to better monitor and forecast drought events, while also establishing forecast-based triggers that can be linked to contingency finance and plans that can incite early action and preparedness.

Food security and livelihoods under a changing climate in Mozambique - 2021 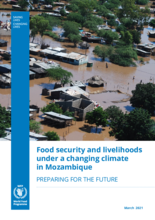