In Jordan, WFP provides close to 500,000 refugees living in camps and communities with monthly food assistance in the form of cash-based transfers. The majority of refugees are from Syria, while the rest are from Iraq, Sudan, Yemen, Somalia, and 27 other countries.

This factsheet provides a snapshot of food security in Jordan based on routine data collection by WFP. The findings presented below draw from two recent studies including; 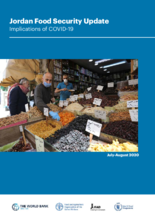