Eyewitness account of a country in free fall shows why the World Food Programme must scale up
23 December 2021, Jonathan Dumont
Emergencies Afghanistan

This year WFP has been fending off famine due to conflict in places like Yemen, Burkina Faso and Ethiopia and induced by climate in Madagascar. But it’s hard to remember an emergency that has been triggered so quickly by economic collapse as we are seeing in Afghanistan.

The United Nations Development Programme says it took five years of war in Syria for its economy to contract as much as Afghanistan’s has since August, when the fall of the Government was followed by international sanctions and the freezing of the Afghan central bank’s assets.

Almost overnight, Asia’s most fragile economy collapsed, leaving people jobless or with unpaid salaries and without access to their savings.

Prior to that, 11 million Afghans were already food insecure due to years of drought, conflict and COVID-19. Now almost 23 million people, more than half the country, don’t know where their next meal is coming from and we see clinics filling up with severely malnourished children. It is the unveiling of a tragedy in real time.

WFP has scrambled to pre-position food in rural areas before the imminent winter snows make the roads impassable. But rather like outrunning an avalanche, the surge in hunger threatens to overcome the convoys of trucks snaking up mountain paths loaded with food.

In November I went to Afghanistan to see how people were coping as winter settled in.

My first stop was Badakhashan Province in the northeast. We landed in Fayzabad airport in the northeast, where an abandoned metal runway built by the Soviet army [during its occupation from 1979-89] had habitually kept the aircraft-tyre dealers busy.

From there we drove for four hours on icy and sometimes unpaved roads, through snow-dusted mountains, towards the border of Tajikistan.

There, at a WFP food distribution in Farooq village, we met Bakht Bibi, a tailor living with her husband and four of her children. When they don’t have WFP food, she and her family survive mostly on bread and tea with milk.

When they can’t afford milk, many families use non-dairy whitener. Meanwhile, drought and high fuel prices have sent wheat prices soaring – making bread, one of the main staples, too expensive for many.

As a result, people in this region have sometimes resorted to eating a variety of “black wheat” or “patuk” instead. This, however, is not fit for human consumption and is suspected of causing paralysis, especially in the hands and feet, due to a chemical it contains.

Bakht told me that she has had to sell her land and livestock and she can’t make ends meet by sewing. Due to the drought, she has to walk increasingly longer distances to collect grasses and shrubs as fuel for cooking and heating.

The food they get from WFP helps keep them from the desperation and starvation that so many are enduring.

From Fayzabad we flew to Mazar-i-Sharif, the commercial centre of Afghanistan.

On the streets around the famous blue mosque, the desperation had spread to and permeated the professional class.

I met doctors, school principals and military officers trying to sell whatever they could – teacups, easy chairs, shoes and spoons. Nobody was buying, however. Nobody could afford to.

A crowd of women, some wearing burkas and some not, gathered around, everyone eager to tell their stories to a foreigner with a camera.

“There is nothing left, just ask anyone here,” a woman shouted, before pointing out a neighbour: “She has five to six orphans but has nothing, no food or anything to eat.”

Another interrupted her and drew our attention to another woman: “Her son was martyred. There are five to six children in her house and they don’t even have a package of flour.”

But it was at a WFP food distribution site, near the airport, where the extent of the despair was driven poignantly home.

There I met 19-year-old Mahmoud, who had recently graduated from high school. His father was dead and his mother was going blind. One brother had migrated to Iran to find work, leaving him to take care of his mother and younger brother.

His voice cracking, he told me in almost perfect English that he has all but given up on his goal of becoming a doctor because the family can no longer afford his schooling.

“Last year, I graduated from high school and now I am jobless. I have nothing. I have lots of dreams and I want to achieve them but, unfortunately, here there is no opportunity to do that. I have no chances. I dream one day I can serve my people. But in this country… I don't know what to do.”

As George Eliot wrote, “What we call our despair is often only the painful eagerness of unfed hope.”

Mahmoud said goodbye, turned and led his mother by the hand, following a wheelbarrow of food. It was enough to keep them alive, perhaps even give a little hope.

WFP is ramping up life-saving operations across all 34 provinces in Afghanistan and a massive uplift is planned to reach 23 million people in 2022, as inflation and currency depreciation make it even more difficult for people to feed themselves.

WFP needs US$2.6 billion to scale up in 2022. This equates to about US$100 per person for the entire year, for each of the 23 million people we plan to assist. If our efforts are supported, we can avoid the worst-case scenario come spring.

Read more here about WFP's work on the Afghanistan emergency 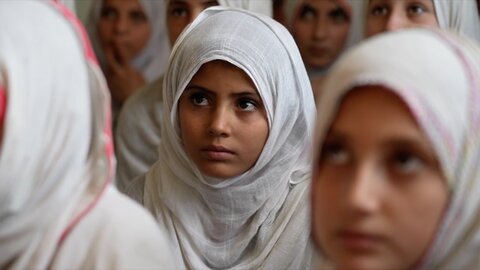 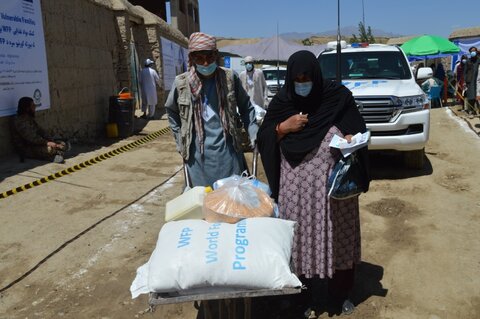 Afghanistan's struggling women: food assistance 'is our only hope'