Being a refugee is not easy

I am Sawyedollah, a WFP Storyteller and Rohingya refugee. It's World Refugee Week and I wrote this story about why I decided to flee to Bangladesh and seek my alive life.
4 June 2019, Ro Sawyeddollah
Campaigns Refugees and migration Bangladesh Myanmar

Sawyeddollah is a World Food Programme (WFP) Storyteller and Rohingya youth activist based in the world's largest refugee camp in Bangladesh. Before arriving in Bangladesh in September 2017, he lived in northern Arakan state, Myanmar. This is his story.

I was born in December 2000. I was a grade 11 student when I realized that I was living as though I was dead in my home in Buthidaung Township, Northern Arakan state, Myanmar. So I decided to flee to Bangladesh to save myself from dying and to seek my alive life, for it was impossible to find it by living at home.

When I started my journey to Bangladesh I found many other Rohingya people were also fleeing Myanmar for the same reason — to find their alive life. It was the rainy season when I fled and the journey was so long. I just took some food such as kedgeree, dry rice and bananas in the hope it would be enough to last me for 10 days. But there were many big mountains between my home and Bangladesh and also those mountains were soaked by rain. I faced many real difficulties to cross those mountains and I had to spend 15 days on foot. I went hungry for four days because my food finished after 11 days. Finally I reached the border of Bangladesh and I swam across the Naf river on 11 September 2017.

Now I'm living here in the largest refugee camp in the world, I am very pleased and thankful to the government of Bangladesh and all the public of Bangladesh for showing kindness and allowing me to live temporarily on their own land. And also I thank all the aid workers for providing me the humanitarian support like the rice, oil and peas I get from WFP. I am free to pray here in peace but in Myanmar I wasn't allowed. With the support of the government and humanitarian workers, I have gained access to some basic services here. I'm very happy for I can ask questions here now but I'm upset for still not getting the answer. I'm living here just in the hope of help coming so I can get my alive life, so far nothing or no one is supporting me to get it.

In Myanmar I lived in a building, but now I'm living here on the ground with a tarpaulin roof. In Myanmar I was allowed to study but here I can't. I need to wait here in a queue of people to the tap if I want to bathe. And also I'm living in precarious conditions – especially during Bangladesh's long monsoon and cyclone seasons it is difficult and dangerous. My opportunities to learn or make a living in my future are now at real risk as time goes on, and I am a stateless child caught in this difficult situation between two lands as a refugee.

WFP trained me to be a Storyteller, so I can share my story with the world. Check out this video and hear why I want you to hear my story from me.

Here's a photo story I took during the WFP Storytellers training about a man I admire.

I admire this man named Nor Islam, 27, from Jamtoli Camp 15, near my shelter. He lives with his family. He has a son called Sawdol Islaam, aged 8, and a daughter, Norfatama, aged 6. I have known him since 15 September 2017, after we both arrived here in Bangladesh.

"I was a farmer, and my family had four members in Myanmar," said Nor Islam. "My wife died on the way when we were running from my home," he said. Now he is living here with his son and daughter.

"I will never marry another, for maybe if I marry another my love for my wife will decrease," said Nor Islam. 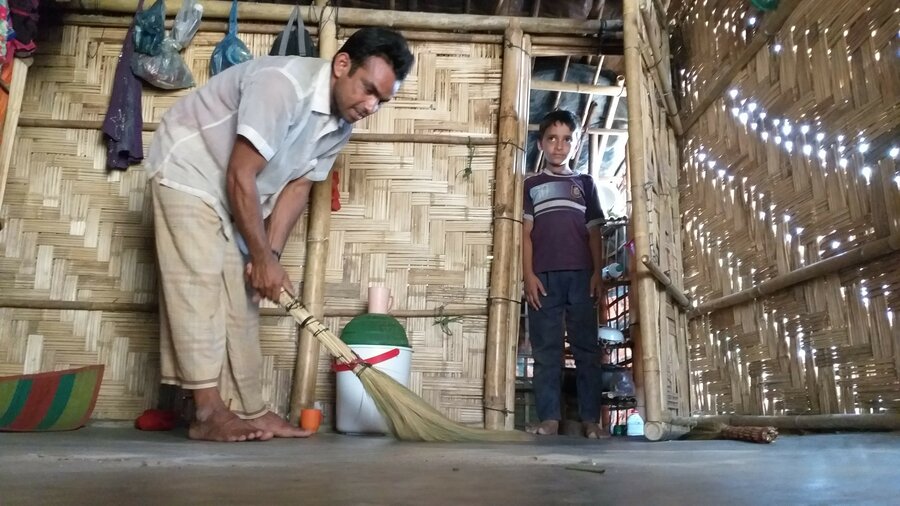 Now he is taking caring of his children with the love of both of a father and a mother. He has a kind heart and he never shows unhappiness. Even when he faces difficulties, he always stays happy. That is why I admire him very much. 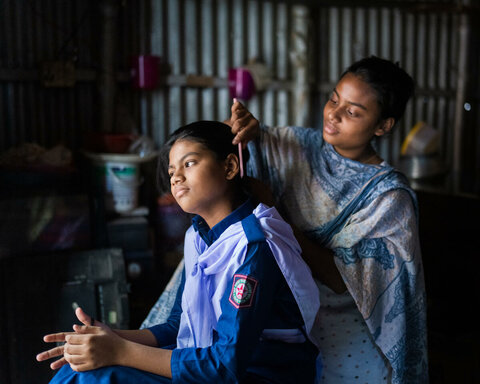