Cash and conflict in the Democratic Republic of the Congo

‘We once had a good life but the war spoiled everything'
6 June 2019, Jacques David
Funding Cash transfers European Union (Member Organization) Democratic Republic of the Congo

Micheline Ngalara smiles as she counts money she has just received during a distribution in Djugu territory in the Democratic Republic of the Congo (DRC).

"My village is close from here but it's too dangerous to go back," says Michelene — "36 were killed in January." She adds: "Receiving cash is the smartest thing to do to help us here. I can pay for my family's healthcare and school fees as well as food, of course.

"We once had a good life but the war spoiled everything as we get killed with machetes and guns," says Michelene, who now lives in Loto village, 70 km from Bunia, the main town of Ituri province.

Humanitarian crises triggered by conflict raging in eastern DRC are driving millions from their homes. Cash assistance provided by the World Food Programme (WFP) helps many people just like Michelene, sometimes also providing the opportunity to start a new life.

A total 2,600 IDPs are being assisted by WFP and its humanitarian partner, INTERSOS. Most fled fighting between armed groups and the armed forces of DRC, from December last year to January 2019.

The causes of these confrontations remain unclear but one thing is certain — it's civilian populations who always pay the price. Villages are looted and burnt, people are raped and killed.

In such a fragile context, cash is precious as it gives beneficiaries flexibility to address the problems they face: 47 percent is spent on food — raising the number of meals from 1.4 to 2.4 per day — and the rest on health, schools and rehabilitation, according to INTERSOS.

In March a post-distribution-monitoring report revealed that in areas to which displaced people have returned, farmers are able to procure seeds and start planting again. Between November 2018 and March 2019, WFP and INTERSOS reached 117,000 people in need.

Around 1,300 km south of Bunia we meet Bahati Mitondo, a mother of four. Just like Micheline, she had to run away from her Tshamwana village near Manono town, due to ethnic clashes.

After multiple displacements in the Tanganyika province, she was settled in the village of Mulange with her family.

"For sure, cash was helpful to buy food and pay school fees. But most of all, I could extend the field I've been exploiting since I arrived end of 2018," says Bahati. "That's why I prefer cash to food assistance. The soil is fertile here and I feel secure. It's like a new life here." Indeed, with the capacity to farm her own land and feed her family, Bahati's on her way to living like she once used to in her village.

Only 10 km separates the bucolic villages of Mulange and Mwaka, but their atmospheres are very different. Mwaka is a site hosting 7,000 IDPs, where a cash distribution is taking place.

It is dotted with rows of blue emergency shelters with white roofs. Among the IDPs we come across is Nyoti Mupisi. She's cooking fufu, a corn paste, with some fish.

Cash pays for food at market

Like the 3,600 people supported by WFP and the Association of Volunteers in International Service in Mwaka this month, Nyoti used her cash allocation to buy food at the market.

Today she spent 1,500 Congolese franks — around one US dollar — to cook the quantity of fufu that she and her son will need today. Nyoti believes cash is a great form of assistance. With the successive distributions, she could buy not only food, but also pans, plates and glasses. Between January and July, WFP supported 242,000 people in Tanganyika province in this way.

In a country where 5 million of children suffer acute malnutrition, WFP assistance in Tanganyika province includes a prevention service focusing on pregnant and nursing mothers and children.

After receiving their cash, mothers are invited for a malnutrition screening and attend a sensitization session on the distribution site: an experienced nutritionist gives tips on breastfeeding and good nutrition habits.

"The security situation in the Ituri and Tanganyika provinces is far from being stabilized," says Yves Aklamavo, head of WFP's Field Office in Tanganyika province. "There are new waves of IDPs arriving in existing sites or setting up spontaneous camps.

"The cash assistance boosts the local economy as the money is spent on local markets. Through this modality, WFP also scaled up its operations more rapidly, helping IDPs to survive and, in some cases, start changing their lives."

Although preliminary results of an Emergency Food Security Assessment in Tanganyika province show an improvement in the WFP-supported territory of Kalemie, needs across the country are still huge— there are 13 million hungry people in need of assistance.

The food crisis in DRC is second only to Yemen's in scale — despite the fact that DRC has the agricultural potential to grow more food than its population requires.

Only with an end to conflict will long-lasting change be possible.

WFP is grateful to the following donors for their contributions to the cash assistance in 2018/2019: the Central Emergency Response Fund of the United Nations (CERF), the Directorate-General for European Civil Protection and Humanitarian Aid Operations (ECHO), the United Kingdom's Aid Direct (UKAID). 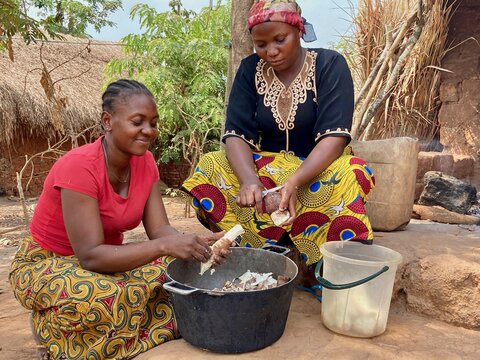