Hawo Ahmed slowly climbs the staircase inside the massive concrete building — the tallest one in the city — and takes a seat alongside the other women in the modern, glass-encased room. She has never set foot into a bank before. In her hands is a blue digital card tucked into a plastic sleeve with the European Union flag on it.

A teller calls Hawo's name. She approaches and hands her card over, which the teller inserts into a point-of-sale (POS) machine while Hawo places her finger on the scanner next to it.

Cash can be managed better

With her identity confirmed, the teller asks whether she'd like her US$90 in cash or on her mobile phone. Hawo wants cash, so he hands over several dollar bills, then motions to the next customer.

"Cash is good," says the grandmother to five orphaned children as she shuffles away from the desk. "I can manage it better."

Hawo and her grandchildren left their home close to the Ethiopian border and moved to Galkayo in Central Somalia about nine months ago, after persistent drought wiped out most of their livestock. Of the 300 goats and 30 camels they used to own, only three goats and three camels had survived.

Shortly after arriving in Galkayo, she began receiving e-vouchers from the World Food Programme (WFP) that allowed her to buy food. Now, for the first time, she is receiving cash, opening up new possibilities for her and her family. She says she will use the money for food, medicines and school expenses.

Hawo's is one of over 40,000 families in Somalia who have been receiving monthly cash assistance thanks to the European Union's (EU) Humanitarian Aid and Civil Protection department (ECHO). This year the EU has provided an unprecedented amount for humanitarian assistance in Somalia: WFP alone has received close to €18 million in funding for its emergency relief cash-based assistance.

This comes at a time when approximately 3.3 million people in Somalia are in need of urgent life-saving humanitarian assistance. Many have lost their livelihoods through widespread loss of livestock and poor agricultural harvests. Massive displacements have also taken place as a result of drought, driving close to 1 million people away from their homes in search of food, water and assistance.

For Habiba, a single mother of six from Lower Shabelle, cash from ECHO has been a lifeline. Drought and ongoing conflict had forced her and her family to move to Mogadishu, where she could barely scrape a living through odd washing jobs that earned her US$8 a month. Since August this year, Habiba has been receiving a monthly cash allowance of US$80 from ECHO. She has been using US$50 on food while she keeps the rest on her mobile phone to cover other expenses.

To deliver the cash, WFP is using its digital delivery platform called SCOPE. With their blue digital cards just like the ones used by Hawo and Habiba, families are able to withdraw their cash allowance through Standard Chartered Bank's payment service providers in Somalia. Depending on their needs and spending preference, families can choose to receive the money in cash or directly on their mobile phones. The use of biometric data (fingerprints) to confirm the identity of recipients provides ECHO with the assurance that their assistance is reaching the people intended.

"Cash (and e-vouchers) has really shown its worth in Somalia in 2017, enabling WFP to quickly scale up its assistance and reach families during this drought crisis," says WFP Programme Policy Officer Nynne Warring, who is also the co-chair of the inter-agency Cash Working Group, which provides a forum for agencies to engage and coordinate on cash programming.

"It also has the added value of supporting and stimulating local trade in areas where markets continue to function, even during the drought."

Most importantly, delivering cash directly into the hands of families upholds ECHO's guiding principle to provide humanitarian responses that address the basic needs of the people who need it most with dignity, flexibility and choice. As the crisis in Somalia ensues, WFP and ECHO continue to explore ways that they can better serve vulnerable populations, to address humanitarian needs while looking for ways to build stronger, more resilient communities for the future. 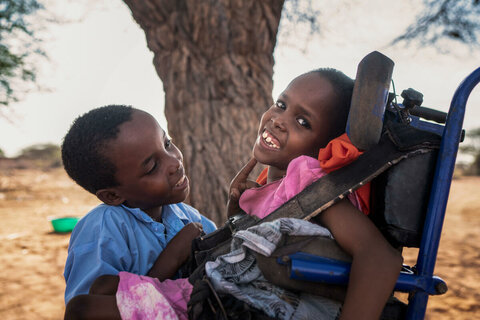