The silhouette of a woman riding a motorbike stands out against the desert-like, almost lunar landscape, as its engine roars. On the back of her bike, a spot of blue: a World Food Programme canvas bag. She's heading home after an emergency food distribution in the Department of Oruro, a six-hour drive from Bolivia's capital, La Paz.

Looking at the dusty dryness all around, you would not guess this area was until recently home to the country's second-largest lake. Sitting at 3,700 metres above sea level, Lake Poopó's saline waters used to cover an area of 2,530 km² — more than three times the size of New York City. By December 2015, however, the impact of climate change had caused the lake to dry up.

As the water disappeared, so did the traditional livelihoods of the local Indigenous Uru-Murato community, who've been living on its shores well before Inca conquerors, and then the Spaniards, extended their empires into to modern-day Bolivia in the 15th century. Also known as "the people of the lake", the community has for centuries relied on fishing.

By 2014, however, the fish had died— the subsequent death of the lake dealt the community a near-fatal blow. Many left to find work and those who stayed could only hope to farm on the arid, salty land which yields a poor variety of crops — potatoes, onions and a few other vegetables.

Remaining community members get by selling parts of such harvests, as well as craftwork, in the markets of nearby towns, where they also pick up jobs as casual labourers.

Or rather, this is how they used to get by. As soon as the news of the COVID-19 pandemic started to spread, people realized that if the virus reached their community, it would be the end for them. A culture dating back centuries risked being wiped out by the virus — so they decided to self-isolate to survive.

"When I first knew about the virus, I was afraid — it was unexpected," says María, who has seven children. "Now we are isolated, hoping the virus will not hit the community."

On this crisp, sunny Friday morning, she is one of the first to arrive to collect her food basket, which contains fortified flour, quinoa, noodles, lentils, canned fish, oats and condiments. Surrounded by three of her younger children, she says that her little plot of land wasn't enough to feed her family.

Before COVID-19, she used to work as a day labourer, tending to other people's flocks of sheep. Her husband, a bricklayer, is also out of work. They are left with no choice but to rely on humanitarian support. "There is no way I can get work, nobody is hiring any longer," she says. Behind her, you can see the area that was once covered by water.

As I drive back to La Paz and replay in my mind the events of the day, I cannot but think of how COVID-19 has tipped this community's delicate balance. Having barely survived the loss of their ancestral livelihood, the Uru-Murato are now sharing the fate of millions across the world, suddenly unable to earn a living due to tight COVID-related restrictions.

The silhouetted woman driving her motorbike across a desert that used to be a lake, however, is a symbol of the hope and resilience that will see them through this global challenge. 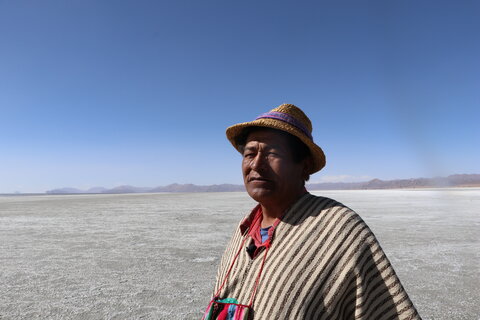