Political will and commitment to school feeding in Africa is on the rise, with more governments supporting policy, legislation and financing
1 March 2019, George E. Fominyen
Protection School feeding

This morning, 10-year-old Agnes is rushing to school on the outskirts of Porto-Novo, Benin. She is taking steps towards reaching her dream of becoming a medical doctor. At the same time, African leaders are gathered in Abidjan, capital of Côte d'Ivoire, to celebrate the fourth Africa Day of School Feeding.

When Agnes talks about why she loves going to class, the meal served at lunchtime in her government-run primary school emerges as a vital incentive.

"I love the Atasi (local dish) that we eat at school…and I will cry if they stop giving us food at school because the food is better here and keeps me from being tired," says young Agnes. "I will not stay on for the afternoon lessons if I am hungry."

African Heads of State established 1 March as Africa Day of School Feeding at the 26th African Union (AU) Summit in January 2016 to ensure that governments prioritize school feeding through policy and legislation; to improve retention, attendance and the performance of children in school; and to spur economic growth in the process.

A sound primary education today could make Agnes a medicine graduate tomorrow. But more than 60 million other children in Africa live in extreme poverty, without access to school feeding programmes.

It would cost US$3.8 billion per year to reach them all.

The challenge for governments, donors and partners converging on Abidjan is to scale up 30 million African children who, like Agnes, are benefit from school meals. Some 30 countries on the continent are busy increasing national investments; approving legal frameworks; improving institutional capacity; and sensitising their communities' involvement to expand existing programmes.

The government of Benin recently approved its National School Feeding Policy, which has institutionalised school feeding in the country, committing US$87 million to reach 3,000 schools nationwide over a four-year period. The meals that Agnes and her school mates receive are part of the Integrated National School Feeding Programme (PNASI) funded by the government and managed by the United Nations World Food Programme (WFP).

"This measure deserves special attention because it contributes to improving access to schooling and keeping children in the school system," says President Patrice Talon. "It also contributes to achieving the Sustainable Development Goal (SDG) 2 on Zero Hunger."

While there is stll far to go to secure full financing, in West Africa alone, governments have invested a total of US$568 million annually in national programmes.

"We are excited by the increasing commitment and ownership of school feeding by African governments. These are their children. This is a solid investment in the development and prosperity of their people and we are here to support them," says Abdou Dieng, the Regional Director for WFP in West and Central Africa.

Many governments are increasingly sourcing food for school feeding locally from smallholder farmers in a bid to boost local agriculture, strengthen local food systems and move people out of poverty — generally referred to as home-grown school feeding.

In Liberia, the success of a pilot homegrown school feeding intervention by WFP and the government triggered a national conference. It embraced the programme as a pathway to enhancing food security, nutrition, health, gender equality, agriculture, education and social protection.

"School feeding programmes are critical to creating markets for farmers," says Samuel D. Tweah, Liberia's Minister of Finance. "If the farmers know that whatever they produce will be bought, they have an incentive to grow more."

Côte d'Ivoire, the host of his year's Africa Day of School Feeding celebration, has long modelled local purchases from small farmers, especially women. It has approved it's a national policy and strategy to further strengthen this aspect of its school feeding programme that currently reaches over a million children in 6,000 government schools. 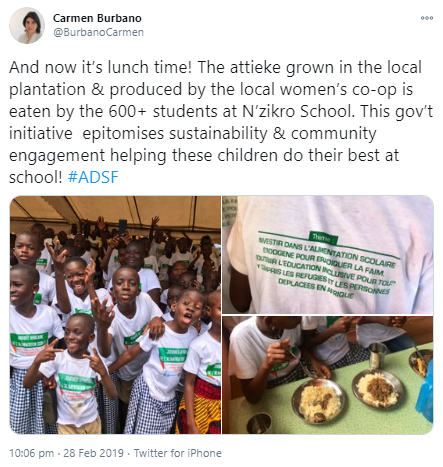 "The benefits of this investment (in school feeding) extend beyond the schools to entire communities — smallholder farmers are finding new markets for their produce, which boosts economies and creates jobs — and governments will reap the benefits in human capital," concludes Carmen Burbano, WFP Director of School Feeding.