On a recent visit to the country the heads of the United Nations food agencies met people affected by devastating back-to-back droughts and saw what was being done to build communities' resilience to withstand such shocks and avoid being plunged back into crisis.

Hadra Abdi is facing the worst drought that she can remember. She lives in the Somali region of Ethiopia, where her husband is a pastoralist, or a cattle herder. At 25 years old, Hadra and her husband have done everything they can to provide for their four young children, but the current drought has stolen a lot from them — their sheep, their cows, and their livelihoods.

"In our good times, we used to own 100 goats and sheep, as well as three cattle," explains Hadra. These livestock were essential for her family, as they gave them the means to survive, allowing them to have meat or milk, and the ability to generate income through local sales.

Unfortunately, the drought was as swift as it was vicious. Hadra was shocked at how quickly she lost over 75 percent of her livelihood. In less than a year, only 15 goats and one cow had survived the drought's wrath.

"My husband and I were very worried at how we would be able to buy food and clothes for our kids, or medicine if they got sick," says Hadra. As part of WFP's emergency food assistance programme in the Somali region, Hadra and her family have been receiving a mix of cereals, pulses and oil, which has helped to carry them through these hard times.

Unfortunately Hadra's story is not unique. She is one of more than 8.5 million people who need food assistance right now, due to a third consecutive year of drought. The hardest hit is the Somali region, where 3.3 million people have been pushed into food insecurity and malnutrition rates have risen to alarming levels.

Since November 2016, families across the Somali region have lost a great number of livestock, which are the foundation of livelihoods of traditional pastoralists — the majority of people living here. These recurrent climate shocks have sparked ripple effects across the region, as families fight to keep their animals alive, access food to survive and ward off the many diseases that often accompany such a fragile humanitarian situation.

During their visit, they saw first-hand what investment in resilience can really achieve in Tigray region, where a number of successful projects have been implemented by the three UN agencies — from irrigation systems to fruit cultivation, and livestock and crop insurance. They then travelled to the drought-stricken Somali region, where food insecurity and malnutrition is high.

While in the country, the UN agency heads noted Ethiopia's impressive progress towards sustainable development in the last few decades. Since the 1990's, Ethiopia has halved absolute poverty (48 percent to 25 percent) and has more than halved the proportion of undernourished people (75 percent to 32 percent). However, the country remains highly vulnerable to recurrent climate shocks, which risk reversing these impressive development gains.

When asked why the three UN chiefs chose Ethiopia for their first-ever joint visit, WFP's David Beasley says that they did not choose Ethiopia lightly:

"When I look at the last 20 to 30 years of the accomplishments here, it is a great success story," said Beasley.

"Although there's more to be done because there are people who are still hungry. We chose Ethiopia because we felt it was a place that we needed to be because of its successes, and where we can partner together with the government and others to further those successes." 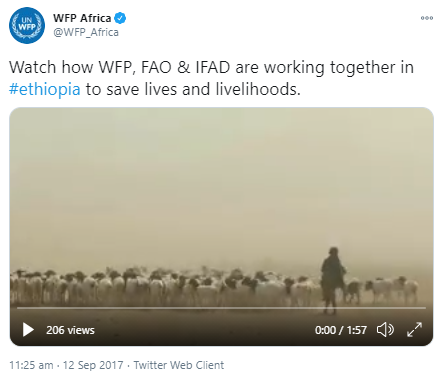 Thank you to our donors

Without the generous support of our donors — our frontline response partners — none of this assistance would be possible. WFP thanks the following donors for their continuing support to our programmes in Ethiopia, which help us to save lives and improve nutrition everyday for 5.5 million people across the country.