Syrian mother Um Abdullah shares with us a simple, nourishing dish, as part of our series exploring the tastes of home for refugees and…
27 October 2016, World Food Programme
Campaigns Refugees and migration Syrian Arab Republic

Syrian mother Um Abdullah shares with us a simple, nourishing dish, as part of our series exploring the tastes of home for refugees and displaced families supported by the World Food Programme.

U m Abdullah and her family fled their home in Hassakeh Governorate in Syria more than a year ago after the so-called Islamic State took over the town. The family finally found refuge in Swaida in Syria's south-west, along with many other families.

"We've been through difficult times. When ISIS attacked, (they) destroyed everything, and left us with nothing to survive. We fled to Swaida in order to live."

Um Abdullah earns a small income from seasonal farming labour, and lives in a tent with her husband and nine children. Safe but a long way from their old life.

One reminder of home is the food Um Abdullah cooks using ingredients she receives each month in a cardboard box from the World Food Programme. The box contains Syrian staples: chickpeas, lentils, white beans, salt, sugar, vegetable oil, rice, bulgur and wheat flour in areas where there are bread shortages.

Sometimes Um Abdullah receives tomatoes as part of her income, or her neighbours give tomatoes as a small gift.

One recipe Um Abdullah makes using these ingredients, is bulgur with chickpeas, or Bulgur bil Homous, for her children. It is one of the most famous dishes in Syria and is traditionally eaten with pickled vegetables, jalapenos (chili peppers) and spring onions. Bulgur is a staple on many Middle Eastern tables — it can be cooked just like rice, absorbing the flavour and juices of the ingredients it is cooked with.

To make the dish, Um Abdullah begins by boiling the dried chickpeas. When they are almost soft, she adds the bulgur to the same pot and lets it boil for 10 minutes. 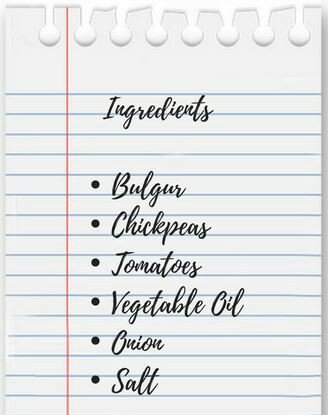 She skins the tomatoes and mashes them, then adds them to the pot just near the end of the cooking time. If onions are available too, these would be chopped and sautéed in the vegetable oil in a second pot until they turn golden then added to the bulgur and chickpeas. A pinch of salt, and pepper if it's available, are added to taste before serving.

When it's time to eat, the children sit on a large mat on the floor, sharing the food from one large plate, each child with a spoon in their hand. Recreating a taste of home gives a small comfort.

"It's tough but we still thank God every day".

Watch the video What's in the Box? to see the journey of a WFP food box and learn more about Um Abdullah's story.

It costs US$75 to provide a WFP food box to a family such as Um Abdullah's.

Visit WFP.org/Syria to find out more and donate a food box to a Syrian family.