On 8 March, four women share the stories of how they are building a better future for their families
7 March 2019, Amina Al Korey
Gender Smallholder Farmers Egypt

Every day through my work with WFP I meet women from different parts of Egypt. They have different backgrounds but they all share one thing: a determination to defy the circumstances they were born in and to make tomorrow a better day for themselves and their children. Here are the stories of four of them.

Fifty-five year-old Sanaa is a farmer from Upper Egypt's historical town of Luxor. The wrinkles on her face make her look much older. They are the marks of countless hours spent in the sun tending to her small plot of land. Sanaa has been doing things very differently from most women in her village; she is planting and harvesting her land on her own.

In her community, farming is considered ‘a man's job', and a woman going to the field on her own is frowned upon. Sanaa grew up watching her mother help in the fields — but she was always accompanied by her husband. Three years ago, however, Sanaa had no choice but to defy all social norms.

"I could see my neighbours watching me as I headed to the field early in the morning and whispering behind my back. I was criticised for my ‘boldness'."

"My husband had a stroke and became bedridden. I couldn't just sit back and let our land go barren. We depend on this land — that's where all our income comes from. Without it, we wouldn't have food on the table.

"In the beginning I could see my neighbours watching me as I headed to the field early in the morning and whispering behind my back. I was criticised for my ‘boldness'. But in Upper Egypt's traditions, women are a red line that is not to be crossed and so no one bothered me despite finding it difficult to accept that I'm alone in the field. And, in time, they actually became quite considerate. 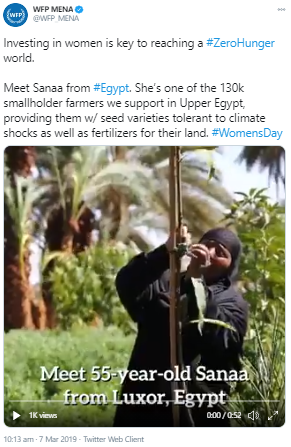 Today Sanaa is quite popular in her home town. Men from neighbouring fields offer to help with her chores, but she politely declines. It is only at times of harvesting, especially wheat, that she resorts to hiring daily workers.

When her husband sadly died two months ago, Sanaa promised him she would nurture their land until her last breath.

Tahia recently started a job at WFP's sun-drying unit in Baghdadi village in Luxor. Here fresh foods — tomatoes in the winter and basil and dates in the summer — are sun-dried and then packaged for export. Previously a housewife, 38-year-old Tahia used to struggle to make ends meet for her family of five. With three girls in public schools and a toddler boy at home, her husband couldn't afford to keep things afloat alone.

The decision to take this job wasn't easy. Women in Upper Egypt are expected to stay at home, tending to house chores and caring for the family. Wanting a better future for her children, however, Tahia decided to break the norms and find a job to increase her family's income.

She heard of the sun-drying unit from one of her neighbours who had just started working there. The project employs women only, in a bid to help mothers like Tahia support their families

"Being a farmer, my husband doesn't have a steady income. There were times when we couldn't afford the bus fare to send the children to school and had to keep them at home.

"In the beginning I was hesitant to work because I have four children and I didn't want this to affect them, but I pushed myself to try. I wake up before dawn each day to cook, clean the house and get the girls ready for school. I am usually done with all these chores by 8:30 and can then head to work.

"Even on days when I feel tired in the morning I still get out of bed because I know I'm doing this for my children and that is all the motivation I need. I want to give my children a better future, I want them to live a fuller life and achieve their potential."

Today Tahia's three girls attend school regularly and she can even afford a tutor to help them with their schoolwork.

While most parents saw their girls as future housewives, Mahmoud had different plans for his daughter Laila. He dreamt of sending her to university to study law and was determined to do whatever it took to help her achieve this, even if that meant being criticised by his family and neighbours.

A university graduate, Laila Mahmoud, has always been a firm believer in the importance of education. She grew up in a society that did not support girls' education, and most girls her age never went to school. The few who did, like her, were considered to be "the exception".

"With no sons, my father pinned all his hopes and dreams on me. He wanted to give me a different future than that of many other girls in our community.

"There were times when I would see other girls playing outside early in the morning as I walked to school with my father. Sometimes I would say things like, ‘why can't I play with them' and he would say: ‘because one day you will become someone they will all look up to'.

"I have fulfilled his dream; acquiring a university degree in law, I didn't let him down. It wasn't easy being a minority in school and it sometimes it made me feel awkward, but my father gave me confidence. I am who I am today because of him."

"I chose to work in a community school because it is the only chance for many girls to get an education."

While the law degree was her father's dream, she had another one of her own: being a teacher. For the past 18 years, Laila has been teaching at a community school in Fayoum governorate, and has played an important role in encouraging parents to send their daughters to school.

"I wanted to help other girls to also get an education, I know how important it is and I want to play a part in fulfilling these girls' dream. I chose to work in a community school because it is the only chance for many girls to get an education."

Community schools are one-classroom schools in rural areas where the nearest public school is 2 to 3 kilometers away. Fearing for their girls' safety, families would keep them at home to avoid the risks of a long walk to school.

"I often go and talk to the families to try and convince them to send their daughters to school. We are a close-knit community and I know most of the families personally, so there is a level of trust that helps me persuade them.

"In class, I always talk to the girls about the importance of education; I explain how this will help them become great mothers who can support their children with their studies in the future.

"I feel a great sense of fulfillment and accomplishment when I see one of my students move on to high school."

Fatma Ali's life used to be very similar to that of many women in Al Malees village, Luxor governorate. Her husband had a job that covered the family's absolute minimum needs. Her two daughters attended the one-classroom community school near their home. However, there was so much more Fatma wanted to give her children.

"The clothes they wore were always too big for them, many were torn up, but buying new ones was a privilege we definitely could not afford. We had other priorities — like getting more nutritious food on the table."

That was when the mother of four started thinking of ways to bring in more money to help her family. The idea of starting up her own business terrified her at first. But — despite it being a novelty in her community — her husband was supportive of the idea. He even pushed her to start.

"In the beginning I was worried about negotiating prices with the men in the market but I had no choice."

"A woman going out to work is totally unacceptable where I live and I was scared to take that step. I opened a small vegetable shop in my home so I wouldn't have to pay rent, and started going out to the wholesale market to get stocks. In the beginning I was worried about negotiating prices with the men in the market but I had no choice."

Although the small vegetable shop had its customers, it brought in very little money. Realizing she had to do more, Fatma took on a loan and training through a WFP project. She learnt how to make perfumes and immediately fell in love with the process. Fatma received a start-up loan of 3,500 Egyptian Pounda. As things went well and her business was proving successful, she was then eligible for a second loan of 5,000 Egyptian Pounds.

Fatma is now known in her village as the perfume guru. What started off as a sell-from-home project slowly turned into a standalone small shop, stacked with coloured bottles that she has produced herself.

"I am the very first woman to produce perfumes in my community. Putting together perfumes is a beautiful experience, you get to be as creative as you want, and there is a great joy in the process. Each bottle has a different smell.

"I have regular clients who call me to place an order so they can come and pick it up when it's ready. I learnt through the training that pleasing your customer is key to the success of any project, so I try to make my services convenient for them."

One of Fatma's dreams was to one day have her own business card featuring the name "Fatma for Perfumes". Today, she has the card along with a successful perfume shop and her vegetable shop. She is now determined to turn this success into opportunities for her four children.

"I want them to have more opportunities than I did. When my boys are older, they too will attend school, that's why I have to work as hard as I can."

9 May 2022 Syria: At home and abroad, families struggle to cope after 11 years of conflict