Haiti: Rebuilding schools, a return to life for an entire community

Three months after the devastating earthquake in Haiti, the first four schools rehabilitated under the lead of the Haitian Ministry of Education are about to be inaugurated. This is the first step of an ambitious project that still needs to be funded in order to take place
15 November 2021, Elise Gibergues-Newton
School feeding Earthquakes Partnerships Haiti

A few more bricks, a bit of putty and a coat of paint – in tropical afternoon heat, Renel Begrade is hastily finishing the last low wall of the Notre Dame de Lamercie school in the commune of Fonds-des-Nègres in Nippes, one of the regions worst affected by the earthquake that devastated Haiti in August.

More than 2,000 people died and, with 1,200 schools destroyed, thousands of schoolchildren were left facing food insecurity – in Haiti 345,000 children depend on the World Food Programme (WFP) for daily school meals.

“We must be quick, everything has to be ready in a few weeks for the return of the first students,” says the mason, who was born in the village.

The walls of this school, which hosted more than 200 students, did not withstand the 4.6 magnitude tremors. “That day was one of the worst of my life... everyone was in tears,” says Renel, adding: “Of course, I thought we wouldn't be able to have a school here again for a long time.

“We are reconstructing a solid building. And for me working on this site means that I am able to earn enough money to pay for my child's schooling fees.”

Ensuring the return of thousands of children to the classroom is a priority for the Government. They are cut off from their education, the playground and also from the assurance of a daily meal in school canteens.

“When we heard that we were going to get help to rebuild the school, smiles returned to the faces of students, teachers and all the people in the community,” says Etienne Molière, the school’s director. “This will help to heal some of the scars of the earthquake…We are looking forward to the inauguration of the new building.”

For the past three months, the Ministry of Education, its emergency cell and the Directorate of School Engineering, supported by the World Food Programme (WFP), have been working hard to rehabilitate the destroyed schools in a record time despite the persistent wounds left by the earthquake, the insecurity resulting from gang violence, and the fuel crisis that hinder access and progress on the construction site.

Thanks to a simple design by WFP, a temporary structure has been erected that has the potential to be transformed into a permanent structure.

The module includes a classroom, kitchen and storage space and can be expanded to include additional classrooms.

The Haitian government has mobilized local authorities, and water, sanitation and hygiene agencies, is working with the private sector, UN organizations and NGOs on issues ranging from access to clearing debris.

“We had to take into account the risk of natural disasters in the region. So, thanks to the Engineering team, the rebuilt schools are all earthquake and cyclone resistant,” says Tanguy Armand, WFP’s Head of Infrastructure in Haiti, who emphasizes the modern design of the new buildings. “The space is airy, bright, and includes access for people with reduced mobility. We’re already seeing an increase in new enrollment.”

The first four schools have already been funded by Switzerland for a challenging budget of US$80,000 each. By the end of 2022, WFP, in support of the Haitian Ministry of Education, hopes to rebuild 190 schools in three departments, but to do so, over US$ 16 million urgently need to be raised.

In the meantime Renel is proud to have finished the construction of one of the first rebuilt schools. In a few days, he will accompany his own son for a back-to-school experience they will both surely remember. “I really thought the school door would stay closed this year - but with this project, life starts all over again,” he says.

On the hills opposite, other schoolchildren are hoping to return to the blackboard and the bell of recess.

For this new schoolyear, WFP has received support from Canada, Education Cannot Wait, France, and the United States Department of Agriculture’s (USDA) Mc Govern Dole Programme for its schoolfeeding programmes. 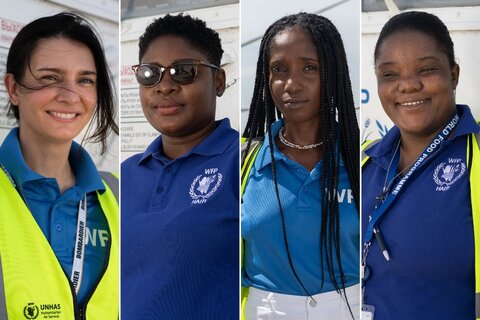