How do you drop food from 17,000 feet into a conflict zone? Watch our video

Imagine being trapped in your hometown with no access to food, water or electricity. Food is running out in the market and you cannot provide for your family. This was a dreadful reality for nearly 100,000 Syrians who were besieged for over a year in Syria's north-eastern city of Deir Ezzor when the city came under siege by militant groups.

My job as an aviation officer in Syria was to run the first ever high-altitude airdrop operation in the history of humanitarian emergencies to deliver life-saving food and other humanitarian assistance to these people.

By any means necessary

Dropping food by parachute from a height of five kilometres (17,000 feet) into a tiny drop zone surrounded by residential and public buildings and active conflict is extremely challenging and risky. But we knew that it was the only way to get life-saving food to besieged families without the aircraft being shot down by militants.

Over the past 15 months my job as the Airdrop Operations Coordinator in Damascus was to direct the pilots operating the aircrafts and the volunteers of the Syrian Arab Red Crescent Society (SARC) waiting by the drop zone to collect the pallets of food and humanitarian supplies, which they distributed to hungry families. The objective was to deliver the pallets, each carrying about 800 kg of food, medicine and other cargo, to the volunteers in the safest way possible, given the constant challenges that arise.

The first challenge we had to overcome is something most people wouldn't think of when considering operations in an active warzone: the weather. Analysing meteorological data received from the UK Meteorological Service and checking it against actual weather conditions based on communication with partner volunteers on the ground was critical to avoid any mishaps such as flying an aircraft through strong winds or a dust storm.

Then there was the challenge of dealing with volatile security and constantly changing frontlines. We had a finite set of volunteers that we trusted to distribute the food, and their safety was central to the success of the daily operations. To avoid any safety risks such as ambush by militant groups during an airdrop, we often changed the drop zone location to ensure safety of our team members on the ground. Over the course of the 15 months, we had to change the location of the airdrops four times due to impending or actual attacks. 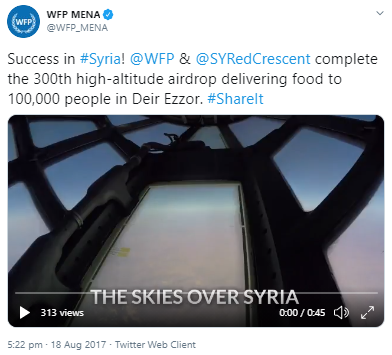 It is difficult to describe the level of tension I felt when watching an operation for which I was responsible unfold before my eyes. Once the go-head was given and the parachutes were released, I was stuck in a waiting game. It took four minutes for the high-velocity parachutes to reach the ground and in that time a militant group could have launched an attack.

The cargo had to be collected and distributed as quickly as possible to vacate the drop zone. These were always the most hectic moments. I could feel the tension in the control room where we waited on bated breath, always keeping contact with the pilot in the air and the volunteers on the ground until each drop — three of them in every operation — was safely in the hands of our volunteers. I can remember clearly each time a strained cry from the team leader on the ground warned of a potential attack. Once, after hearing a loud bang over the radio, the team leader called in to report what happened.

"Hamza!" he called. "Do you remember the red building we use as a marking point?" I did remember it. "Well, there is no red building anymore."

It was shelled just minutes after we finished one of our operations. If the attack had happened during one of the drops, and one of our volunteers had been hurt, there would not have been any medical help around to save him. Knowing that these people were literally risking their lives to give others trapped in the city a chance to survive made me vigilant and decisive in my decisions to end or continue an operation. It was the least I could do.

When it was not the fear of militant attacks or the occasional bomb threat or shooting, it was dealing with children who loitered around the drop zone trying to enter it to collect empty pallets to use as firewood. We had to keep them away from the drop zone not just for fear of being caught up in any cross fire, but for the very real fear of being hit by one of the dropping pallets. The children knew the danger coming in, but the fact that they kept coming always highlighted the sheer level of their desperation.

That desperation is exactly why we did all of this and why we will continue to do it whenever the need arises. These airdrops are done in the most extreme of situations, when people are completely isolated from all other channels of support. Each airdrop is a complex mixture of anxiety and hope. Anxiety for the safety of the crew and the collecting team and hope for a successful delivery of aid to those who desperately need it.

I have never met anyone from the Deir Ezzor region and they will never know my name. The unsung heroes are the men and women who risked their lives on the ground to deliver hope and sustenance to hungry families during the worst times of their lives. Those are the people who deserve true recognition; I am happy to have had the chance to help them in the best way I can, even if just from behind the scenes.

Well into its seventh year, the Syrian conflict has left millions in need of food assistance. Since the onset, WFP has been on the front lines, doing whatever it takes to deliver food to families in need by sea, land or air.

WFP conducted 309 airdrops on the city of Deir Ezzor. A total of 8,200 pallets were dropped, delivering over 6,500 metric tons of humanitarian goods. The operation ended after the siege was finally lifted in early September 2017.

You can be a lifeline to Syrian children and families who are in desperate need. DONATE NOW.