"There are some families that go to bed some days without one meal — people are struggling simply because even basic medicines are not available," says Eddie Rowe, World Food Programme (WFP) country representative and director for Zimbabwe.

The country is suffering its worst hunger crisis in more than a decade. "Prices of basic commodities are skyrocketing," he says. "Many products are not even available — we estimate 2.3 million people in about 15 towns and cities are not just food insecure, they are in poverty."

With the lean season in full swing, southern Africa is in the grip of unprecedented climate-driven disaster. Temperatures in the region are rising at more than twice the average global rate and ever more erratic rainy seasons are hitting the country's subsistence farmers hard.

"We aim to scale up to assist more than 4.1 million people by January, which is the peak of the lean season," says Rowe — double the figure WFP is helping now.

A huge logistical undertaking, the scale-up envisages the sourcing, purchase and delivery to the landlocked country of more than 240,000 metric tons of commodities by the end of June, a challenge all the more daunting because drought and flooding have eroded food supplies across much of Africa.

‘People with master's degrees are selling water in the street'

WFP needs US$293 million to be able to fully implement its emergency scale-up through to the end of June, providing life-saving rations of cereals, pulses and vegetable oil and specialized nutritious food for children under 5 years of age. Yet only 30 percent of that figure is currently secured.

Exacerbating problems is unemployment at more than 80 percent, says Rowe. "You have massive numbers of people who cannot find a job," he says.

WFP recently put an ad out to recruit drivers. "PhD holders were applying," he says. "People with master's degrees are selling water in the street … people are deploying all kinds of mechanisms just to survive."

Meanwhile, rural people are moving to urban areas only to find that "basic services are not available, livelihood opportunities are sort of disintegrating".

In Harare's Epworth suburb WFP already runs an assistance programme for close to 20,000 people. With more funding the organization will be able to help up to 200,000 people in eight urban locations.

Adding to woes, the Government has fired hundreds of doctors who were on strike over pay, leaving hospitals paralyzed. "Only a fraction of people can afford it go to private clinics — that's where you find qualified doctors," says Rowe

One positive sign is that the security situation is, for now, relatively stable.

"This is what is puzzling," says Rowe. "When you have a socio-economic situation like this in a country, you expect the security levels to be very high. Surprisingly no … this level of security is way below what you would expect in any context where you have socio-economic problems."

A Sierra Leonean, Rowe says he is impressed by the resilience of Zimbabweans. "These people think out of the box to survive," he says. "They have that innate capability to be able to withstand these types of shocks and to find a way to get around it." But he adds: "Our fear is that it would come a time when they would exhaust all these coping mechanisms."

Another encouraging sign is that WFP is well-received on the ground.

"At the district and local level we have very strong coordination and partnerships: district authorities, councillors, village heads, these people are perhaps our greatest partners. They understand the need and see how we come in in a very transparent manner, engage with the authorities and work with them."

One reason for this is that, says Rowe, is that "at WFP, we do not engage with politics so we hardly have opportunities to engage with politicians. Our business is with the communities and with local leadership — that's where our actions are."

Funds are required immediately, he stresses, if WFP is to meet the growing needs of the hardest-hit Zimbabweans.

"We rely on the generosity of donors and I must say the donors have been generous," says Rowe. "They have been coming to our aid and providing the much-needed resources."

More is needed, however, as WFP works with partners such as UNICEF and FAO to keep up resilience programmes to protect Zimbabweans from the worst effects of climate change, as well as respond to the evolving emergency. "People are struggling," says Rowe. "They are suffering." 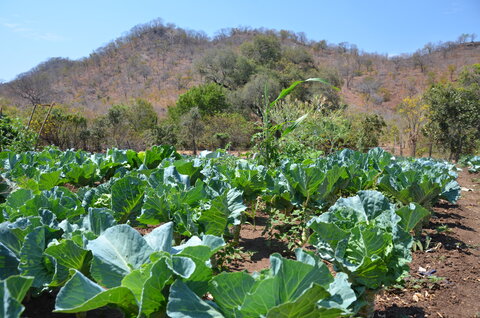