Thomas has lived in Kalobeyei refugee settlement in Turkana for the past six years. The last two have been some of the hardest as a result of a prolonged drought.

“I come from Burundi where I used to practice farming," he says, “so when the farm here opened up, it was natural for me to join the project.”

Thomas is one of the pioneer farmers in Kalobeyei. First displaced by conflict into Tanzania, he later moved to Kenya with his wife and four children determined to make a new life. With land disputes still rife, returning to Burundi was not an option.

Kalobeyei settlement - home to about 44,000 refugees - was established in 2016 with self-reliance and socio-economic integration between refugees and host community at the core of its design. Agriculture and trade are key to bringing the refugee and local communities together.

With support of the European Union Emergency Trust Fund for Africa (EUTF), the World Food Programme (WFP) and partners have established rainwater harvesting ponds, built greenhouse-like structures and modern markets to accommodate farmers and traders from the settlement and the surrounding community.

This infrastructure excited the farmer in Thomas. But life is full of curveballs.

“The rains disappeared for almost two years,” he says. “The water pans dried up and we could no longer grow crops. We were reduced to relying on bamba chakula (WFP’s cash transfer) only. I have a family of four – so I receive 6,000 shillings (about US$50) a month.”

Before the drought struck, Thomas and other farmers had enjoyed a successful harvest season.

“Life was changing for the better,” he says. “With enough water, I was going to start selling the surplus produce – but God is the only one who knows why the rains ceased.”

Kalobeyei and the water catchment regions north of the settlement received some rains in May 2022 allowing the water pans to recharge, if partially. Farming has picked up again and new shoots have turned the farms green.

Thomas has planted cowpeas on his 10x10-metre plot. He says that the harvest will ease the burden of providing food to the family.

“I mostly plant cowpea on my plot. We cook the leaves as fresh vegetables,” he explains. “I would like to plant sukuma wiki (kale) but it requires a lot more water – and water is scarce here.”

He adds: “If the harvest is plentiful, I will sell some and buy other foodstuff.”

Nasri Faiz, a refugee from Sudan, grows okra and cowpeas. Okra is his cash crop. In 2019, prior to the drought, he was selling 5 pieces of okra for 50 shillings. He’s planted his plot again and is hoping his business will pick up where it left off nearly two years ago.

“I am alone in Kakuma. I lost most of my family in Khartoum,” he says. “I rely on farming for my upkeep. Look at me – the clothes I’m wearing are bought with the proceeds of this farm.”

Drought is not the only problem staring down the refugees. Nasri says that prices of staple foodstuffs such as rice, cooking oil, and maize have doubled, worsening an already bad situation. He hopes for more rains because the extra income is his only way out. When he is not farming, he works odd jobs to earn some cash.

Kalobeyei’s water pans are designed to tap surface-runoff water whenever it rains. The water is pumped to an overhead tank using a solar power and from there it flows to the drip irrigation pipes to feed crops that are protected from the harsh sun by shade nets.

WFP’s dug five irrigation water pans with a combined capacity of 265,000 cubic metres, equivalent to 265 million litres. When full to the brim, they can sustain crop production for at least four months irrigating 21 hectares of land. Most varieties grown here mature within two to three months.  The UN’s Food and Agriculture Organisation in partnership with the Turkana County Government trains farmers on good agricultural practices.

EUTF has also supported the excavation of three dams for watering livestock with a capacity of 130,000 m3 (130 million litres) that quench the thirst of about 40,000 animals from the surrounding villages.  This livelihoods-based infrastructure is a lifeline for people like Thomas and Nasri.

“I cannot go back home because it is still unsafe for me,” Nasri says. “I have to make a life for myself here.” 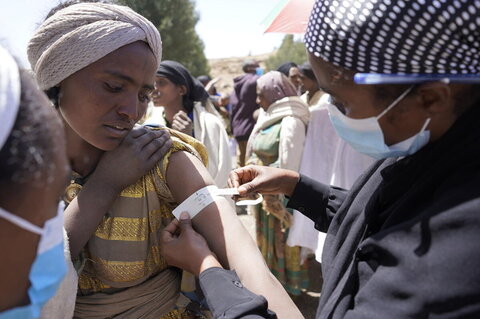 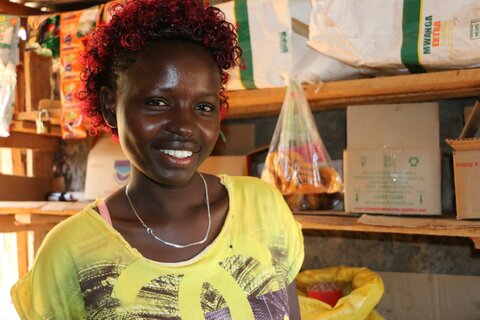 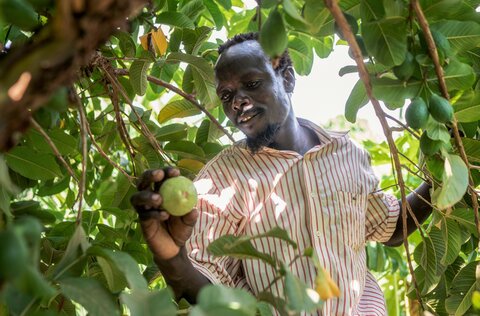