“When I grow up, I want to be the chief of WFP – like Edmond Vorizo,” says Seraphin, 12. “I want to give orders such as, ‘Build a water well here, build another one there.’”

While not technically WFP chief, Edmond Daniel Vorizo is local WFP staff: “I’m a hydrogeological engineer, but I work for WFP’s school feeding programme,” he says.

Here in Ifotaka, southern Madagascar, water is on everyone’s mind. Three years of drought have left the land cracked and dry, the crops withered. With cyclone Batsirai having ravaged the east of the country, food here may be even scarcer, as torrential storms disrupt supply lines.

The cyclone season, which lasts until April, might bring much-needed rain – or widespread destruction.  But, so far, the drought has meant scarce produce and fodder for cattle – and little food for the community. In a region where 80 percent of people depend on agriculture to survive, one in two now face the threat of hunger.

“Water has been very rare, here,” says Seraphin. “To fetch it, we need to walk 5 km, and always come back late at night.”

Long, trying walks are nothing new to Seraphin. Until recently, getting to school meant walking for three hours to the Primary Public School in Tsarapioke – and three hours back. An increasingly lonely journey, as children dropped out, simply too hungry to manage it.

Vorizo is also a local, having grown up in nearby Ambovombe. “It’s important to our community that a kid from the village works for the World Food Programme,” he says. “Also, we speak the same dialect. If there’s a problem, they don’t hesitate to come to WFP – ‘Because Vorizo is here.’

But when it comes to hunger, things are finally looking up. Working with the community, Vorizo and WFP have established a canteen, which doubles up as a school for the children of this and neighbouring villages.

The initiative is part of WFP’s school feeding programme, with critical support from partners like world-renowned fashion designer Michael Kors. Kors has been working with WFP for almost a decade to help provide healthy, nutritious meals for girls and boys in food-insecure regions of the world.

Through the global Watch Hunger Stop campaign in support of WFP – now in its ninth year – Michael Kors has helped shine a spotlight on the issue of hunger in schools, while raising funds to help the organization deliver more than 29 million meals to children in need – and counting.

Children in Ifotaka can now enjoy a hot, healthy meal, every day.

“We have three goals,” says Vorizo. “The first is to keep kids in school – many quit because they’re starving.” A second aim of the initiative is to support the children’s parents. “Families here can only afford one meal a day – by providing an extra one in school, we want to help with household expenses,” he says.

“The third objective is to increase schooling rates. And it’s working – since we established the canteen, children registered for school here have more than doubled, going from 157 to 327.”

Vorizo adds: “I know this is my lahatra,” using the Malagasy word for destiny.

“With support from partners like Michael Kors, WFP is now the largest provider of school meals in the region,” says Pasqualina Di Sirio, WFP Country Director in Madagascar.

“Where soil and climate allow, we also work together on home-grown school feeding initiatives, offering fresh local produce in school meals,” she adds. “And while our support is key, it is the community that ultimately makes this possible – particularly the women, who play a leading role in the canteen management committees.”

“Solutions to hunger need to be thoughtful,” says designer Michael Kors. “And WFP’s school feeding initiatives are precisely that: thoughtful, impactful ways of reaching children like Seraphin not just with food – but with opportunity, hope, and the prospect of a happier, safer life.”

“Because of this canteen, I can now study here, close to my house,” Seraphin says. “No more 3-hour walks to the school in Tsarapioke.” He spends this newly found free time with friends, or playing a mandolin he’s made himself.

He also helps at home, cooking or washing up. The help is needed, as both parents work hard to support their family of seven – his mother selling firewood and his father working in sisal fields, a plant whose long, fine fibres are used to make rope.

“Thanks to the school canteen, my children can eat,” says Hinidisoa, Seraphin’s mother. But it’s a hard life, and she wants better opportunities for Seraphin: “It’s important for him to go to school to find a job. This way, he will be able to have new prospects, such as working in an office, as a policeman, something like that.”

Whether Seraphin’s lahatra – his destiny – is to become a policeman, a musician, or WFP Chief, is not yet clear. But as long as he has a full stomach and a school to attend, those possibilities – and more – are all open to him.

Find out more about WFP’s work with private sector partners

WFP does not endorse any product or service. 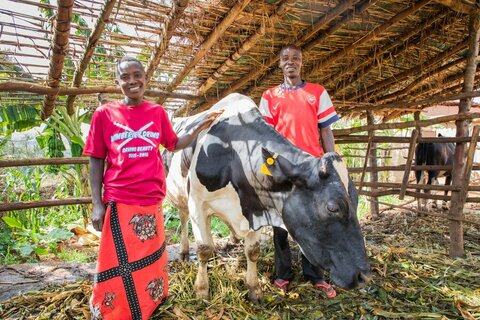