World Food Programme at hand as violence fuels hunger, prompting many to flee their homes
22 May 2021, By Mahamadou Abdourhamane
Mali

This article marks the anniversary of Resolution 2417, passed by the UN Security Council on 24 May 2018, banning the use of starvation as a weapon of war and confirming the links between hunger and conflict.

Sadio still remembers every single detail of the day her life — and that of her family — was turned upside down. It was a market day. Around noon. Sadio was out selling groceries with her two children when unidentified armed men broke into the village and started firing rounds.

“They killed my husband, my uncles and many other people in the village,” she says, as tears roll down her cheeks.

Sadio and her children narrowly escaped the attack thanks to the goodwill of neighbours who helped them flee to Sevare, the capital city of Mopti region in central Mali, where many militias and non-state armed groups are roaming and preying on the local population.

Here, intercommunal conflict and population displacement, compounded with the effects of climate change, continue to push thousands of families into food insecurity. Working with the Government of Mali, the World Food Programme (WFP) and its partners continue to provide emergency food assistance through cash transfers to internally displaced persons, refugees, returnees and conflict-affected families.

“We were welcomed here by a family. They gave us a roof and are supporting with food,” says Sadio.

As they flee, displaced persons are often empty-handed, and their children miss out on school for indeterminate periods. They rely on their host families or international solidarity to meet their basic needs including shelter, water, hygiene and food.

Whenever possible, displaced people club together to survive as a community: host families know they too could quickly become vulnerable as a result of sharing their limited resources with their guests.

“I help families with household chores such as washing dishes or clothes,” says Sadio. “In exchange, they give me food or a little money. This is how I try to meet our needs.“

Sadio ’s journey and story are similar to those of many other families who have been forced to flee their villages and find refuge in relatively secure towns such as Sevare, Ségou, and Bamako.

In her village, Sadio  was a businesswoman. She sold local food products and manufactured items. Her husband grew groundnuts and had a garden that was a source of food and income for the family.

Now, Sadio  and her children have lost everything. They are among thousands of people in Mali who are currently unable to meet their basic food needs by themselves.

In March, the Cadre Harmonisé food security analysis revealed that 4 million people in Mali were food insecure. That includes 867,000 men, women and children in a crisis situation, requiring emergency food assistance. The main drivers of this situation include conflict, forced population displacements, climate change and the effects of the COVID19 pandemic.

Working with the Government, between January and April, WFP provided emergency food assistance through cash transfers to 180,000 newly displaced persons, including Sadio  and her children.

Through its work with local communities, WFP also reinforces the capacity of individuals to absorb, adapt to and transform security and climate shocks, through a diverse set of activities. These include school-feeding, prevention and treatment of malnutrition, assets creation, support to smallholder farmers and nutrition-sensitive food value chains.

Beyond the food assistance received, Sadio dreams of only one thing: an end to the fighting so that she can return to her village.

“I feel safe here,”  she says. “But it is not the same as in our village. There, we had everything. We could drink milk as we wanted, and we also had plenty of food.”

To ensure continued emergency food assistance over the next six months, WFP in Mali requires an additional US$79 million.

In Mali, WFP’s emergency food assistance is funded by Brazil, Canada, Finland, France, Germany, the Government of Mali, Italy, Japan, Republic of Korea, Spain, Switzerland, UK, and the US. 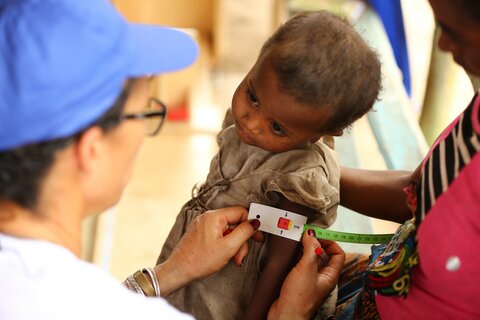