My trip to Senegal’s Sahel as alarm bells ring…

I am WFP's Country Director in Senegal. I am travelling with members of my team in Matam, a vast region in the north-east of Senegal to see for myself the effect that drought in the Sahel is having on the local population. In the village of Orefonde, the people used a local proverb to explain why so many of them had come to meet me, even though shadows were lengthening and the day was drawing to a close.

"When you are drowning and you see a pirogue, you swim to it," says the Fulani proverb that they used.

Looking around the simple building, I counted more than 70 people seated on mats around me; the women to my left in their colourful boubous, the men to my right wearing chechias, clutching prayer beads.

In Senegal, more than 357,000 people in six departments, mainly in the north (Matam, Podor, Kanel, Ranerou, Goudiry and Tambacounda) will be in crisis situation this year.

"Our stocks are empty, we don't know what to do."

"The rains were just too poor," Demba Lao Ndiaye, the village head, tells me. "We couldn't get a good harvest. As the river didn't rise, we couldn't plant along the banks either," he adds, referring to the important practice of flood plain cropping on the fertile soil of the Senegal river.

The river runs like a lifeline across the arid landscape. When the birds and insects came, most villagers abandoned the fields which now lay barren around the village.

"Our stocks are empty, we don't know what to do," the local chief despairs.

Such expressions of quiet desperation were frequent as I spoke to more and more people faced with this slow onset crisis, far away from the capitals and the eyes of the world. Rarely in the headlines and unable to attract the support needed to address chronic challenges of climate change, degradation of resources, a demographic explosion and poverty, the population of the Sahel is vulnerable to recurrent climatic shocks every few years.

The question is not if a drought will happen, but rather when.

Until their resilience has been sufficiently strengthened to withstand such shocks, year after year, families across the region are forced to become masters of coping strategies to survive.

"We hardly cook meat or fish any more, only sorghum, maize and peanuts," Fatou Seydou Ndiaye tells me on behalf of the women of Orefonde. "We divide our meals in two or take only two daily meals instead of three."

Women in particular do not eat in the evening, saving the food for the small children and men of the family.

"It is really hard for us this year, even our vegetable gardens didn't grow and there are hardly any forest products to collect," says Fatou.

The most affected households are those headed by women or older men, or where there is a high number of young children.

Pastoralists are equally, if not worse, affected. Later in the evening, as the setting sun was turning the desert a golden hue and the oppressive heat was finally letting up, I met with Abdoulaye Diallo, the head of a pastoralist community currently settled in Thiaguel about 20 km away. Despite numbering almost 800 people and thousands of animals, it was hard to find the community, as only children, women and old men could be seen around.

"I sent the men and boys away with the animals in October," Abdoulaye Diallo explains. "There is nothing to eat for my herd here anymore."

He showed me how the few animals left behind had become too skinny to fetch good market prices and could no longer give milk to feed his children. In combination with poor access to water, he could see his children were already getting malnourished and sick. Many of them had stopped attending school as they lacked energy to go or had to follow their fathers in search of pasture.

This early transhumance (temporal migration of pastoralists to where there's pasture) risks causing tensions between pastoralists and agricultural communities, as competition for scarce resources intensifies.

In this migration-prone region of Senegal, where many youths have left for the city or Europe in search of employment or a better life, remittances can sometimes help remaining families weather the storm. In difficult years such as this one, even this is not enough.

Some admitted to illegally cutting and selling firewood, a further strain on an already fragile environment. Others send family members to do domestic or manual labour. This allows them to collect salaries of CFA15,000–20,000 (US$28–37.5) per month, which won't go far as market prices of cereals rise further.

The local authorities I met share the concerns of their constituents. In Podor, the northern-most city in Senegal across the border from Mauritania, officials told me that this is the worst drought they've seen in years. The lean season, traditionally lasting for three months in June-August, has already started and will therefore last for six months.

Even moderate development gains made — such as reversing global acute malnutrition rates in children below the emergency threshold set by the World Health Organization — were at risk. A local representative of the government nutritional entity tells me that children they measured in February were already malnourished. "Without assistance, we risk falling into red again," the official says.

At the central level in Dakar, the government began already in January to draft a response plan to address the impact of the drought, and released resources through its social protection programmes to some of the most affected households. Despite considerably strengthened emergency response capacity, which surpasses that of more affected countries in the region, the Government would need partners to help them meet the scale of this year's situation.

Building resilience for the future

In Matam, an official I spoke to promised he would make all the resources available to help the population but stressed it would not be enough. "We await you," he said, "both for the immediate response and to build resilience and create livelihoods for the future. I have seen too many of our youth leave from Matam".

As part of WFP's Sahel Shock Response and in support of the Government of Senegal's response plan, WFP aims to provide targeted food assistance to 130,000 vulnerable households in Senegal through cash transfers as well as nutritional products to all children under 5 and pregnant and nursing women, (an estimated cost of US$6.4 million). WFP also supports the Government's vision of a hunger-free Senegal by 2030, in which food-insecure households have access to adequate nutritious food all year around; and vulnerable populations are resilient to shocks and can rely on integrated sustainable food systems. Support WFP to help the people of the Sahel. 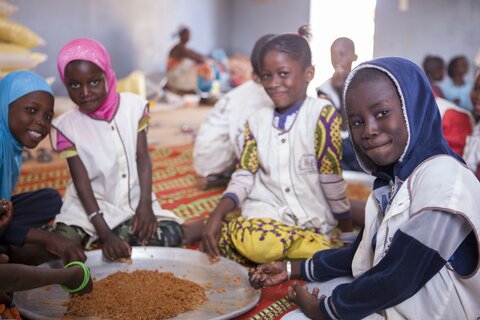 School feeding in Senegal brings the wider community into the mix