In northern Haiti, EU cash gives thousands of people a chance to help their families

Carreaux-Daty and Haut-Moustiques are two remote villages located in the commune of Port-de-Paix in the North-West of Haiti. Here, thanks to funding from the European Union, the World Food Programme (WFP) has been supporting vulnerable communities whose livelihoods have been put at risk by multiple factors, including economic decline, climate change and natural disasters.

Farilien Saintode, 59, is one of the many people who benefitted from the cash assistance programme this year.

“I have been a farmer all my life,” says Farilien. “The land around here used to be rich and fertile, and we always had food on the table, but things started changing in the last few years. There is barely any rain, and our crops are not growing”.

Striving to provide for his family, Farilien is a single father of four. “Now that farming is not an option anymore, I started digging tree roots to make charcoal out of them. I then sell it on the local market, but it is not enough. It’s a backbreaking job, especially at my age, but I have no choice if I want my children to have a decent future.”

In this area, long rainy seasons used to make the land thrive with fruit and vegetable twice a year. However, due to climate change, communities here are increasingly caught between extremes. Recently the region see-sawed between crippling drought and devastating cyclones and floods, eroding already fragile livelihoods, leaving families without the means to earn an income.

Cash transfers are unconditional: they give communities the ability to respond to their biggest needs and at the same time invest in more sustainable solutions that in the long run will enable them to feed themselves. This also helps to boost local economies by providing employment, and empowers people by reducing their dependency on food assistance.

“When I received this cash, I felt so grateful I wanted to cry,” continues Farilien. “Two of my children still go to school, so the first thing I did with the cash was to pay their school fees. I then bought clothes and food, and I’m saving the rest to buy a chicken. This means fresh eggs every day,  and I can sell the extra ones at the market.”

Another problem faced by farmers in this area, especially in Port-de-Paix and Saint Louis du Nord, is access to land. These zones of the North-West department have one of the highest population densities, causing the reduction of cultivation areas, particularly in the hinterland.

Many of the youth have left, searching for better economic opportunities. Joel is young and ambitious, but struggles to make a decent living here. “I am the only one who works in my family. My mother depends entirely on me, and I have a two-year-old daughter I have to provide for.”

Joel has been receiving WFP’s cash transfers for several months now, and will be able to save enough money to start a small business. “This money came at the right time for me. With the first cycle of cash received, I managed to build a small house for my mother and buy some food. Now, with the rest I can finally invest it in a small business that will allow me to be independent. Just the thought of owning my own shop, without relying on anyone else, makes me very proud”.

Thanks to the cash received by the EU’s Civil Protection and Humanitarian Aid Operations department (ECHO), WFP has reached more than 27,000 food insecure people with unconditional cash transfers in the North-West of Haiti.

However, the situation remains dire. Today in the country, 4.3 million people – 44 percent of the population analysed – are food insecure, and this figure is expected to rise to 4.6 million between March and June 2022, according to a recent food security assessment. The North-West is one of the three areas in the country where emergency levels have been reached.

WFP's emergency assistance in Haiti in 2021 is generously funded by Andorra, Canada, ECHO, the Fund for Economic and Social Assistance (FAES) through the Inter-American Development Bank, Germany, the International Organisation of Francophonie, Japan, LDS Charities, the Ministry the Interior and Territorial Communities (MICT) through the World Bank, South Korea, the Swiss cooperation and the United States Agency for International Development (USAID). 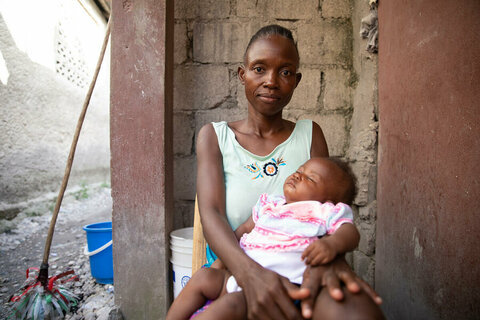