Bullen, a slight and softly spoken man, is a powerhouse when he takes his camera in hand and stands before his new students — 34 young refugees participating in the WFP Storytellers training in Bidibidi settlement, Uganda.

"I was once a refugee, just like you. My journey to be who I am today started with a training, just like the one you are on now," he says.

"As a refugee in somebody else's home, your dreams are very important to you," continues Bullen. "If you are passionate about something — no one can block you."

Thirty-four young and hopeful faces stare back at Bullen. Spike G, one of the students, locks eyes with his former classmate and thinks back to a time when they kicked a football around on the same team at Kakuma refugee camp in Kenya.

"As a refugee, your dreams are important to you."

Spike G is a rapper and is renowned for his energetic live performances in the camp. He tells stories through his music and spends his days writing lyrics — in his mind and across the wall of his mud hut. "I want to be a WFP Storyteller because I want to pass a message," says Spike.

Bullen and Spike were reunited after ten years during the 2018 WFP Storytellers training in Bidibidi. Both masters of the arts in Kakuma and still today, they are united in their passion for drama, music and storytelling.

Because of the war in South Sudan, Bullen and his family travelled back and forth between South Sudan, Ethiopia and Kenya for most of his life. In 1995, when he was around six, he joined his uncle and cousins in Kenya's Kakuma refugee camp and enrolled in school there.

"There was a bad atmosphere in the camp, but my future kept me going."

"The education system was solid in Kakuma, and there were lots of opportunities in arts, drama and dance that I couldn't access safely back in South Sudan," explains Bullen. "I got involved with it all, as you never know which skills you may need in the future." Spike and Bullen met at their local drama group — happy in their freedom to explore their creativity in peace.

But life in Kakuma wasn't always easy. Spike, Bullen and their neighbours were harassed at night by the host community, who would threaten and steal from them.

"There was a bad atmosphere in the camp," says Bullen, "but my future kept me going and so did the food from WFP. I couldn't have gone to school on an empty stomach. That food allowed me and my friends to live and go on to fulfill our dreams."

Spike went back to Juba in 2008 to continue his studies at home. "It was my motherland and I was longing to return. When Independence came in 2013, I was so happy and education was steady for a while." He studied Public Health at Malakal university and developed his own music career on the side, recording rap records and performing at events. But Spike's creative utopia was turned upside again when war broke out in 2016 and he was forced to become a refugee for the second time — in Uganda. "They came into my university compound shooting and eventually my dad was taken from our home. I don't know what happened next. We had to leave immediately."

Meanwhile Bullen completed Secondary school in Kenya in 2009, and then returned to Juba to study Mass Communication and Journalism at the Christian University of South Sudan. In 2014, during his final year, National Geographic selected him to take part in their one-week Photo Camp in Juba. Professional photographers trained Bullen to use a camera and tell stories through his lens. This was the first time he had so much as held a camera and it turned out to be a life-changing moment.

"The training sharpened my eyes and mind — everything changed. I was inspired by those photographers. I knew then I wanted to tell stories through photos."

After the photo camp, Bullen was aching to take photos all the time. He bought an SD card, put it in his pocket and every time he saw someone with a camera, he would ask to borrow it and take some shots. He entered one of his favourite photos — a shot of disabled basketball players — into a UNESCO photography competition and won first prize: a Canon camera. Now nothing could stop him.

"Photography became my blood," says Bullen, "it kept me going all the time. I posted my photos on social media, people liked them and asked for more. My Facebook page became like my CV and my profile as a photographer just grew and grew."

"We need to tell those stories. There is a generation to come and they need to know about South Sudan."

Bullen overcame the odds to be one of the most sought-after local photographers in South Sudan, contributing to the Associated Press, Reuters and international humanitarian organizations. "You must fight for it," Bullen tells the Storytellers, "most people don't understand the power of photography, so we need to tell those stories: positive stories about culture and tradition — not just the negative ones about war and conflict. There is a generation to come and they need to know about South Sudan."

Bullen joined fellow trainers Hugh and Rosebell in Bidibidi to train 34 refugees in digital storytelling skills: photography, video and social media. His humility and quiet determination shone through as he quietly told the students his story and showed them examples of his work. His bright smile and passion for finding new stories were infectious as he guided the students through their practical exercises.

Bullen helped 17-year old Joseph, a trainee storyteller from Yei in South Sudan to shoot a photo story in his local barber's shop. It was clear from the outset that Joseph, one of the more eloquent students, was full of potential. He was inspired by Bullen's story. "My hope is that one day I will be like him," Joseph said. "I want to take photos and let the whole world know what is happening in my community. I hope that in the future I will get a good education, have a good job and I can take care of my mother who suffered and helped to raise me."

During the two-week training, this group of young men and women shared stories in all forms and on whichever theme they chose. Many stories were about school, the sacrifices they or their family made for them to afford an education, and the hope and future this now gave them.

Spike developed a real passion for photography under the guise of his old friend Bullen, but he shone through first and foremost as a musical storyteller. "Writing lyrics is just like writing a story. When I came here and WFP gave me food, I was fine then, I could sleep well and then the words started coming to my mind." Spike's creative flow was rejuvenated by food and the WFP Storytellers training. He performed his song "I am tired to be a refugee" at the graduation ceremony on World Refugee Day, 2018.

"It's great that WFP Storytellers lets them record what they like, this is when the real and the beautiful stories come out," Bullen says. "When I see them being trained and how passionate they are — I can see this is the real move. This is the way we introduce them to the real world: they were in their houses but now they are out here learning and looking at the world in a different perspective."

So, what is Bullen up to now? He's recently returned to Juba from the United States after attending a National Geographic Storytellers summit and is on a mission to leave his storytelling footprint in South Sudan and neighbouring countries for others to follow.

"WFP gave me food to survive, thrive and become a photographer — so what WFP invested in me, I wanted to give back to the community."

"It's like a dream come true to train the future generation of storytellers. A refugee can achieve great things in life. WFP gave me food to survive, thrive and become a photographer — so what WFP invested in me, I wanted to give back to the community."

"I'm a living example. I've been suffering but I never said that's the end of me. Human beings in this world need to eat to survive, if there is life you need food — WFP was there for me when I needed it and they have been giving food to millions of others since. I hope there will be some time when these people go back to their country to fulfill their dreams — the food from WFP is vital for them to do so."

WFP Storytellers teaches photography, video and social media to empower the people we serve with the skills and creativity to speak to the world. So far, WFP Storytellers has trained 200 refugees and individuals in food insecure communities in Jordan, Chad, Guatemala, Uganda, Bangladesh and Djibouti, Follow the stories they produced on Facebook and Instagram.

This World Refugee Day, June 20, WFP will hand the microphone to the storytellers. Keep an eye out and watch them takeover all of our social media accounts!

WFP's storytellers all have dreams, help to feed their future now. #feedourfuture 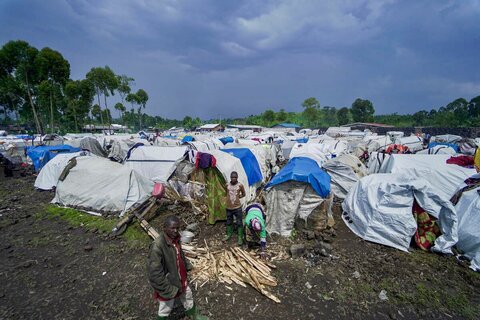