Q&A: ‘Why do people have to die before a famine is declared?’

Famine — driven by conflict and fueled by climate shocks and the economic downturn caused by the COVID-19 pandemic — could soon become a reality for millions of people. Below, the World Food Programme’s acting director of nutrition, Allison Oman Lawi, explains what famine is — and spells out the urgent need for action to avert it

What is your experience of famine as a humanitarian?

Allison Oman Lawi: During the 2011-12 famine in Somalia, I was working with UNHCR, the UN Refugee Agency, on the frontlines, to support refugees heading into Ethiopia; 250,000 Somalis died before they were able to even get support across the border.

I remember saying at a donor meeting: “We need a million dollars and we need it this week.”

Someone asked: “Are you going to declare famine?” I said: “We're not quite there yet. But I promise you, the famine is going on right now. We have seen it with our own eyes ... but the declaration is still to come.”

It was an awful negotiation, but it really drew on this idea: we need to be able to raise the alarm when a catastrophe is unfolding, not wait until things are even more dire to respond.

So, it is all about meeting the right conditions?

AOL: In theory, the definition is clear. Famine is a very deliberate moment where three different indicators are met: 20 percent of families face extreme food shortage; at least 30 percent of children suffer from acute malnutrition; and the daily death rate exceeds two out of 10,000 people.

Food shortages are the easiest benchmark to measure. Mortality is the most complicated —  it's very difficult to gauge how many people are dying as a disaster unfolds. And it might take one to two months for the peaks in malnutrition to become apparent, as families will typically prioritize the children, with adults skipping meals.

‘We don’t wait for a declaration of famine or a survey on deaths, because once people are dying, it really is too late, morally and ethically’

One of the reasons that WFP is really good at knowing we’re hitting the tipping point, which could push the population over the brink, is that we’re there, on the ground. But there are times when we can’t go in and count gravesites or go to hospitals and look at records to see exactly how many people have died.

WFP begins its response before a situation becomes catastrophic — we don’t wait for a declaration of famine or a survey on deaths, because once you are at the stage that people are dying, it really is too late, morally and ethically.

You talk about tipping point

They’d all reached that tipping point: crop failure, livestock death, food stores exhausted or, no food or money for militants who demand “taxes” — people know next time the militants come they will take the children instead.

AOL: Famine is tragic, a horrifying moment in time, but it also leaves a legacy for the whole next generation. When you look at things like cognitive development alone, if a child hasn’t grown well, they will never recover that cognitive loss. When families, communities and nations are impacted by famine, it casts a shadow on their future.

Malnutrition in children leads to stunting or chronic malnutrition that affects their health for life. Going through extreme food shortages at an early age can lead to the risk of becoming overweight later in life. Your cells never trust you again, and they hoard any nutrient that comes in for the rest of your life.

How can we best prevent famines?

AOL: It’s about the things you do to strengthen the systems. That could be peace and reconciliation work, where you make sure that you've got groups of people that are learning how to peacefully coexist through joint projects such as learning farming techniques; when you do climate work such as building a dam to avert the effects of a drought. It's when you build resilience in a community or family by making sure children are vaccinated, eat enough nutritious food and have sufficient clean water.

At WFP, we place a heavy emphasis on preventing all forms of malnutrition including wasting, stunting, vitamin deficiencies and overweight/obesity through direct nutrition programming, but also through school feeding, agricultural support, cash transfers, or retail strategies that improve a family’s access and afford a nutritious diet.

What’s the main cause of famine?

Access to humanitarian support can make the difference between life and death, and access is often a primary casualty in conflict. If people can’t reach life-saving support and women and children can’t access nutrition programmes, the catastrophe can quickly become a famine.

Learn why preventing famine is a choice 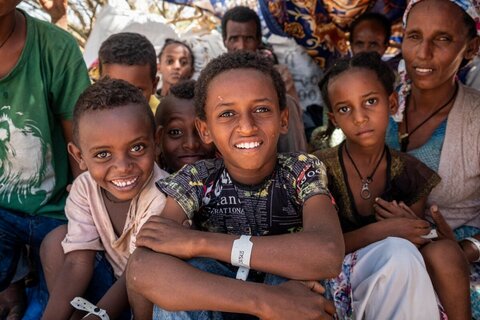