Dieynaba Diallo has had little to smile about in the past few months. Like most people in her community in Dodel in northern Senegal, the harvest from her fields was bad and her livestock suffered from lack of fodder due to the erratic rainfall and drought that have hit several parts of West Africa's Sahel region.

"I have been under tremendous stress and even considered selling my goats, which would have been a disaster as they are my only means of livelihood," says Dieynaba, a mother of five children. "I depend on my two goats and on my gardening and have had difficulty meeting the food needs of my family."

Communities in the Sahel that are dependent on rain-fed agriculture annually experience a tough three-month period between two harvests when food stocks are depleted. This period — known as the "lean season" — usually starts in June. This year, Dieynaba and others had run out of food supplies by March.

Up to 5.8 million people need food assistance in the Sahelian nations of Burkina Faso, Chad, Mali, Mauritania, Niger and Senegal from June to September because of the hastened arrival of the lean season.

In Senegal, the government has elaborated an emergency response plan which seeks to help almost 380,000 people. In support of this plan, the World Food Programme (WFP) plans to provide food and nutrition assistance to more than 130,000 people mainly through cash transfers.

WFP started its support to people affected by climate shocks until the next harvest in the departments of Matam and Podor. The use of vouchers, which can be exchanged with local retailers for food, allows for a quicker and more cost-efficient response and enables people to make choices about what they eat, which can lead to more diversified diets and improved nutrition.

Dieynaba was among the women and men gathered for the first distribution of vouchers in Dodel. There was a clear feeling of relief in her voice and demeanour after she collected her voucher to the value of Francs CFA 30,000 (roughly US$ 53).

"Every morning when I woke up, I wondered which benefactor would come to my rescue to offer me something to prepare our lunch, the one meal the family has been having for a few months," says Dieynaba who is the sole provider for her school-going children since her husband abandoned them a few years ago. "With these three months of assistance coming at the right time, I will be able to meet the food needs of my family."

WFP will conduct three distributions for 44,000 people in the department of Podor and 22,000 people in the department of Matam with financial support from Denmark and the United States of America. To prevent and treat moderate acute malnutrition, which risks increasing during the lean season, the response will also include specialised nutritious foods for children aged 6 to 23 months and pregnant and breastfeeding women.

The WFP lean season response in Senegal is undertaken in partnership with Senegal's National Council for Food Security (SECNSA), the General Delegation of Social Protection and NGO-partner Africare and in close coordination with FAO and UNICEF.

As most people would prefer to take their destinies in their own hands, WFP's response also involves ‘food for assets' activities to help communities strengthen their resilience to recurrent climatic shocks.

"I hope that this year's rainfall will be good enough to allow me to resume my farming activities," says Dieynaba. "O Ndiarama WFP, O Ndiarama Africare," she says in Pulaar language (meaning thank you WFP and thank you Africare)

WFP still needs US$ 4.8 million for its Sahel response. Read more about the situation in the Sahel here. 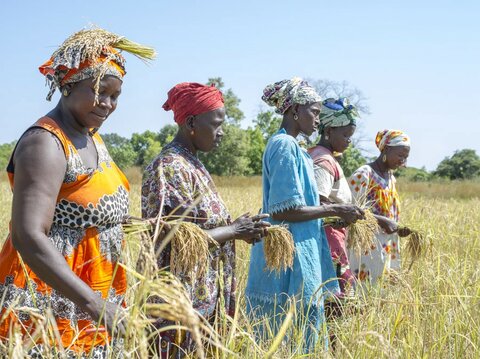