by Alexis Masciarelli in Haiti

"We had nothing left," says 24-year-old Dianise Vixama. "There are days I don't know what my children will eat but today, I'm proud to have food to share with my family."

There is anticipation in Dianise's eyes. The young mother of two will cook tonight. Her husband, a casual farm worker, helps her pack a month's worth of rice, peas and vegetable oil. In the school compound of Chansolme village, dozens of other people also get ready to go home, carrying the food on their backs or, for those living further away, on donkeys or motorbikes. This is the Nord-Ouest department, Haiti's most food insecure area, and today the United Nations World Food Programme (WFP) has organized an emergency distribution.

Millions of Haitians have been hit hard by rising prices, a weakening local currency and a drop in agricultural production. One in three, or 3.7 million people, are in need of urgent food assistance, including 1 million who require "emergency assistance", according to a nationwide study conducted in August by the CNSA (National Coordination for Food Security) with support from WFP and the Food and Agriculture Organization of the United Nations (FAO).

Since WFP started scaling up its operations to provide emergency food assistance to 700,000 people, some, like Dianise, are receiving food while the majority are given cash they can use to buy food in local markets and shops.

"Together with our partners, we are doing our utmost to reach a growing number of vulnerable people with emergency assistance," says Miguel Barreto, WFP Regional director for Latin America and the Caribbean, currently visiting Haiti. In just one week in November, WFP managed to distribute the equivalent of US$ 1 milliion in local currency to some 13,000 families across three departments.

Since September, road blocks caused by social and civic unrest further restricted access to food for vulnerable people, as they prevented both food and customers from reaching markets. 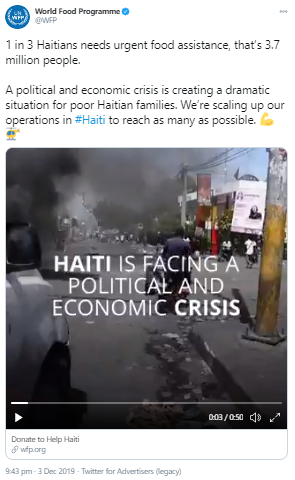 "We do not live well, we do not eat well, and we cannot even move around normally because of the chaos in the country," says Osena Previlon, who grows fruit and vegetables on her small plot of land outside Gonaives, the largest city in Haiti's Artibonite department. "We used to sell what we harvested in our fields, but now we can't."

The country is locked

Osena says few buyers brave the insecurity and road blocks to reach the Plateau market in Gonaives, a primary marketplace for much of northern Haiti, where she now sells her produce.

"The country is locked. It is not doing us good because our products end up rotting," she adds. Osena participates in a WFP programme through which fresh fruit and vegetables are purchased locally for school meals. But with some schools still closed, her income is increasingly strained.

"I paid my children's school fees but they can't attend class," she says. "The project with the school has stopped. Our heart is torn apart."

WFP's school feeding programme normally provides meals to 300,000 children annually in 1,200 schools nationwide. It is considered to be the largest food safety net in Haiti. However, only 60 percent of schools have reopened after closing since the turmoil began three months ago.

"Despite these challenges, we are committed to ensuring the continuity of our assistance. It's heart-warming to see schools reopening. With children returning to the classrooms, we can provide them with a hot meal. For poor families, it is often the only meal they eat in a day," said Barreto after visiting a newly-reopened school near Gonaives. 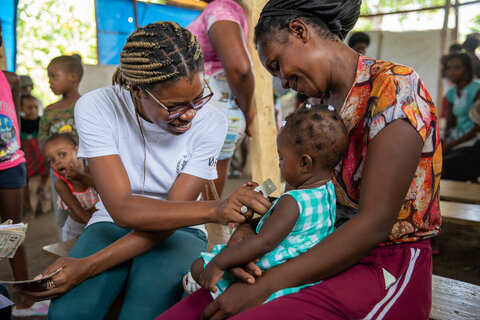