The World Food Programme (WFP) is extremely concerned about the state of food security in Lebanon after the country — already in the throes of its worst-ever economic crisis — was rocked by the explosion in Beirut on Tuesday, which killed 137 people, a figure that is expected to rise.

Kicking off its response, at the behest of the Lebanese Ministry of Social Affairs, WFP will be allocating 5,000 food parcels to affected families — each package is enough to feed five people for one month and includes basic food items such as rice, pasta, oil, sugar, salt and tomato paste.

"Damage to Beirut's port, where ships carrying a third of WFP's food supplies for the region dock, will significantly exacerbate the already grim economic and food security outlook in the country," a spokesperson for the organization said.

Chief among fears is that 120,000 metric tons of the country's staple food stocks stored at the port — including wheat, soy and other beans— have perished and that the price of food will skyrocket.

E-cards from the World Food Programme, worth US$40 per months, are helping families put food on the table

Even before the explosion, food security in Lebanon was a cause of serious concern, with one million people already living below the poverty line and 45 percent of the Lebanese population sliding into poverty, according to the World Bank.

WFP continues to provide 107,000 Lebanese with assistance through its e-cards — debit cards loaded with cash to buy food — through the Government's National Poverty Targeting Programme.

The latest WFP survey on the combined impact of Lebanon's economic crisis and COVID-19 lockdown measures on livelihoods and food security revealed that food has become a major source of concern, with 50 percent of Lebanese respondents saying over the past month they felt worried they would not have enough food to eat.

Food imports, which account for up to 85 percent of the country's food needs, saw a sharp decrease in the six months to April. As a consequence, the cost of staple foods has doubled in recent months.

With up to 300,000 people feared to have lost their homes since Tuesday, the food crisis is accompanied by a health crisis as hospitals — already suffering under the weight of COVID-19 cases — are forced to turn people away. 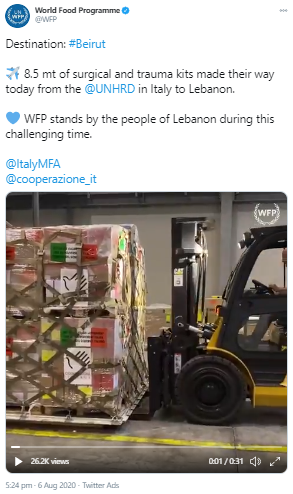 While assessing food security needs, WFP is seeking to facilitate medical support where possible. On Thursday a flight to Beirut — carrying 8.5 metric tons of surgical and trauma equipment donated by the Italian Ministry of Foreign Affairs — set off from the WFP-run United Nations Humanitarian Response Depot in Brindisi, Italy.

The organization, its partners, donors and the Lebanese Government are urgently seeking to protect the most vulnerable by improving and scaling up social assistance for the poorest, including through emergency safety nets.

WFP is planning emergency food assistance to support 50,000 vulnerable Lebanese families — up to 250,000 people, affected by the economic and COVID-19 crises — in collaboration with several humanitarian agencies. WFP is also distributing food rations to 13,000 families of children who were included in its school meals programme.

The expected increase in food prices comes at a time of soaring unemployment rates and salary cuts with many families struggling to make ends meet.

Looking to empower people over the long term, WFP will continue programmes helping to build — and rebuild — irrigation and stormwater drainage canals, fruit and vegetable markets and key roads to enhance the agricultural sector.