BERLIN – Germany’s support for the United Nations World Food Programme (WFP) is crucial for continued assistance to millions of Syrians inside and outside the country, said the UN agency today.

“Syrians have gone through eight years of conflict and unimaginable hardships,” said Muhannad Hadi, WFP Regional Director for the Middle East, North Africa, Central Asia and Eastern Europe, during a three-day visit to Berlin. “Millions have been forced to restart their lives in a new place and even in a new country. Germany and its people have always been the biggest supporters for our work to help Syrians get by and create a future for their families.”

Germany is again WFP’s top donor for its Syria crisis response, meeting the needs of refugees and displaced families. Given the complex and diverse setting of the Syria regional response, WFP works to meet emergency needs at an extraordinary scale, while supporting people and governments to ensure resilient livelihoods, disaster preparedness, and promote food security.

Since the onset of the conflict, the German Government has contributed to WFP around €2 billion for food and nutrition assistance as well as logistics. So far this year, the German Federal Foreign Office has provided €208 million and announced another €106 million for relief activities. To strengthen the resilience of Syrian families and vulnerable host communities in Jordan and Lebanon, the German Ministry for Economic Cooperation and Development (BMZ) supported WFP activities with more than €34 million.

“The conflict in Syria is and remains the focal point of German humanitarian aid,” said Dr. Thomas Zahneisen, Director Humanitarian Assistance at the German Federal Foreign Office. “More than 17 million people in Syria and neighbouring countries still urgently need support. WFP, with its large network and expertise in humanitarian food assistance, is a key partner for us.”

“For BMZ, WFP is a reliable and important partner- not just to secure the food security of refugees and host communities, but also to strengthen their resilience and therefore their hopes for a better future. After eight years of war we must continue our joined efforts to create better prospects on the ground. For that WFP is an important pillar of our support of the people in the region,” said Dr. Elke Löbel, Commissioner for Refugee Policy and Director for Displacement and Migration, Crisis Prevention and Management at BMZ.

Germany has been among the top three donors to the WFP Syria crisis response over the past four years. In 2016 it provided WFP with the largest single contribution WFP ever received – €570 million – that allowed WFP to reinstate food assistance for more than four million people in Syria and provide electronic food vouchers for 1.6 million refugees in neighbouring countries. 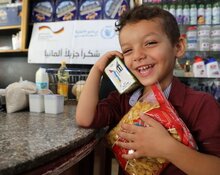