Two thirds of the 100 million people assisted by the World Food Programme (WFP) live in conflict-affected and insecure settings, which are often affected by gender inequalities, power imbalances, and general conditions which heighten the risk of abuse and exploitation, including of sexual nature.

Any acts where our employees and those associated with our work use their positions of power to exploit those we serve are against our very mission, values and standards of conduct. WFP has a zero-tolerance policy against sexual exploitation and abuse.

Sexual exploitation refers to any actual or attempted abuse of a position of vulnerability, differential power, or trust, for sexual purposes, including, but not limited to, profiting financially, socially or politically from the sexual exploitation of another. Sexual abuse is the actual or threatened physical intrusion of a sexual nature, whether by force or under unequal or coercive conditions.

Preventing sexual exploitation and abuse is a moral imperative for WFP, and as such, it is mainstreamed throughout the organization and its operations, and incorporated into our legal framework.  Our approach to Protection from Sexual Exploitation and Abuse (PSEA) puts victims at the centre and is rooted in the United Nations Secretary General Bulletin on PSEA, which includes six core principles and defines  SEA as ‘acts of gross misconduct’, constituting grounds for termination of employment.

WFP’s Ethics Office supports prevention measures throughout the organization which includes providing guidance to a network of over 300 PSEA Focal Points, located in all Regional Bureaus, Country Offices and field offices with significant staff presence. PSEA Focal Points are tasked with supporting prevention, including raising awareness among employees and partners, and receiving reports of SEA directly from victims. PSEA Focal Points must refer all reports to WFP’s internal investigations body (the Office of Inspections and Investigations). 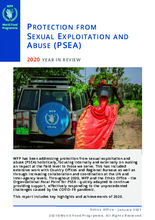 Brochure on Protection from Sexual Exploitation and Abuse (PSEA) - 2020

Our protection from sexual exploitation and abuse work

Strengthening capacity
A key aspect in the prevention and reporting of SEA is awareness. WFP employees and partners are expected be able to define, recognize and respond to SEA, including understanding their obligation to report. They are capacitated through the provision of advice, guidance and tools to do so, thus living WFP’s commitment to a victim-centered approach. Employees are required to complete a mandatory e-learning on PSEA as part of performance evaluation. 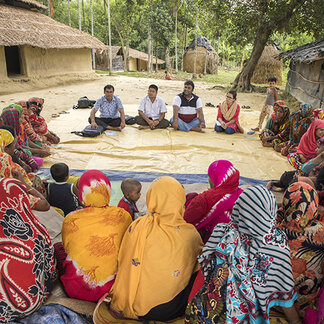 Integrating prevention and protection
WFP approaches PSEA in a holistic manner, based on the premise that preventing sexual exploitation and abuse means more than having the right policies in place. For PSEA efforts to be most impactful and effective, WFP mainstreams PSEA concepts, principles and best practices into operations, core learning modules and tools.

Interagency and donor engagement
WFP is an active participant in Inter-Agency Standing Committee (IASC) and UN coordination, at the leadership and technical levels. WFP supports collaborative, coordinated actions, such as developing PSEA tools for global inter-agency use: - an interactive learning package for partners ('Saying No to Sexual Misconduct') - a harmonized screening tool for partners (‘UN Implementing Partner PSEA Capacity Assessment’) 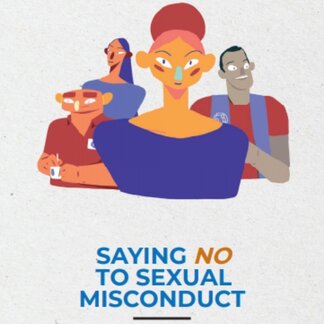 Reporting SEA
WFP employees and partners must report any concerns or suspicions of SEA. All reports are confidential and can be made anonymously to WFP’s internal investigations unit, the Office of the Inspector General - OIG, or PSEA Focal Points (who refer matters to OIG). If you have any concerns or suspicions regarding SEA, make a report ‘here’. As part of the UN system-wide approach to PSEA, WFP shares data on allegations with the UN Secretariat. Read ‘more’. 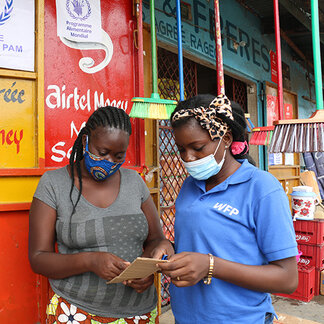 Victim-centred approach
WFP takes a victim-centered approach to its prevention and protection measures against sexual exploitation and abuse. We seek to ensure that victims are provided with support, as needed, at the same time as reports are investigated. We rely on protection partners and strong local referral networks for direct assistance for victims of sexual exploitation and abuse. WFP also collaborates with the UN Victims’ Rights Advocate.

COVID-19 adaptation
While COVID-19 has particularly impacted women and girls, creating even greater risks of sexual violence, WFP’s commitment to preventing SEA has not waivered. In this regard, we have developed the following tools: - Regional online capacity-building sessions for PSEA focal points; - PSEA Key Considerations Supporting WFP’s Response to COVID-19; - IASC Checklist to Protect from Sexual Exploitation and Abuse during COVID-19.