Cash transfers and vouchers in response to drought in Mozambique

Mozambique is highly exposed to weather-related hazards and faces periodic cyclones, droughts and floods. With predicted 800,000 people in severe food insecurity in the 2018-19 lean season, DFID funded WFP and HelpAge to provide cash transfers or commodity vouchers to around 120,000 beneficiaries in Tete province. Two notable features were introduced in the intervention. The first was linking the lean season assistance with social protection, by involving national social security institutions and prioritizing recipients of routine social assistance programmes. The second feature was providing transfers through a ‘separation of functions’ approach, with programme implementation and accountability roles divided between WFP and HelpAge. The interventions also created an opportunity to develop lessons on the use of unconditional cash transfers - unlike other countries in the region, cash transfers have not been used in disaster response owing to government concerns about dependency, expectations, responsible spending and market access. After cyclones Idai and Kenneth hit Mozambique in March-April 2019, the breadth of the exercise was expanded to consider emerging issues on the planned use of social assistance for recovery.

This report is the result of a study commissioned by the World Food Programme in Mozambique and undertaken by an independent consultant, with financial support from the UK Department of International Development.

Download "Cash transfers and vouchers in response to drought in Mozambique"

Climate Crisis and Malnutrition - A case for acting now 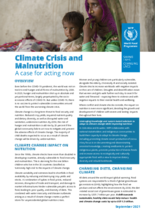 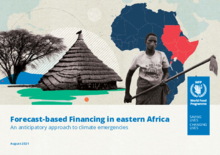 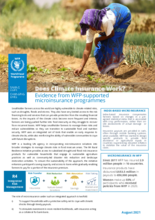