The Cost Of Hunger In Malawi

Country reports Nutrition Malawi
The Cost of Hunger in Africa Study, which was commissioned by the African Union and supported by the United Nations Economic Commission for Africa and the World Food programme, in which Malawi participated, has confirmed the magnitude of the consequences that child malnutrition have on health, education as well as on the national economy. The study has highlighted that the country has incurred huge economic losses associated with under nutrition, the highest being the cost in loss of potential productivity.

The COHA study is a continental initiative aimed at estimating the social and economic impacts of child undernutrition in Africa focusing on the health, education and labor sectors. It provides governments and partners with key actionable and time-bound priority recommendations to improve the lives of children across the continent. The findings of the study provide sound evidence to inform policy dialogues and increase advocacy around the importance of preventing child undernutrition.

The total estimated yearly cost of undernutrition in these countries, in terms of GDP, varies from 2% (for Egypt) to 17% (for Ethiopia). Improving the nutritional status of children is a priority that needs urgent policy attention to accelerate socio-economic progress and development in Africa.

Malawi has made remarkable progress in improving child health outcomes as evidenced by reduction in infant and under- five mortality. However, there has been slow progress in reducing malnutrition. Currently, the country has high levels of stunting among under- five children, which is an indication that chronic food and nutrition insecurity are still prevalent. The high prevalence of malnutrition has impacted greatly on education and health outcomes.

The Cost of Hunger in Africa series 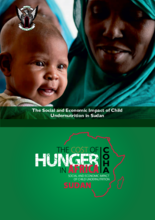