The Democratic Republic of Congo’s hunger crisis is a complex one. Conflict and displacement, combined with natural hazards, economic decline and diseases like COVID-19 have pushed more and more people into hunger.

Célestine is a grandmother and widow who is also the main breadwinner for her family of five. She recently returned to her home after fleeing her village due to conflict and insecurity. Today she is at a WFP distribution site in Kasai, in the Democratic Republic of Congo.

“It has not been easy for us since we came back,” says Célestine. “This is the first time anyone has given us any assistance. It has given us hope for the future.”

She says that she will use some of the money received from WFP to buy goats so that her family will have something to fall back on if times are difficult again in the future. Individuals receive about US$15 each for every distribution cycle, with larger households like Célestine’s receiving more.

In the first ten months of this year, thanks to donors like the European Union, WFP accessed more than 1 million  people like Célestine with emergency cash assistance, the majority of them in the Kasais and the eastern regions of DRC. In doing so, WFP not only helped address food insecurity, but also boosted local economies as the money is spent at local markets.

The biggest driver of people like Célestine becoming displaced is conflict. There are currently more than 5 million internally displaced people in the country. In just the first half of 2020, 1.4 million people were forced out of their homes in eastern DRC.

For the millions of people who are struggling to put food on the table, WFP’s support is a lifeline. It not only helps them feed their families but enables people to cover other basic needs such as shelter and education.

“I managed to save a bit of the money we were given earlier and pay part of the school fees,” says Elisée, a mother of four who also received assistance at the distribution centre in Kasai. She says that for a long time her biggest fear was not being able to keep her two eldest children in school. “With what we have been given today I will be able to pay the rest and there will still be enough to buy food.”

Reaching vulnerable people in the DRC can be a challenge at the best of times, given the almost non-existent road network in parts of the country. But in 2020, the COVID-19 pandemic added an additional layer of complexity to WFP distributions.

Distribution sites had to follow strict hygiene rules, meaning some distributions took longer than usual to complete. People arriving at the site had to wear masks, wash their hands with soap and have their temperature taken, all while keeping a safe distance from others present.

The European Union is a long-standing partner of WFP in the DRC. Through its Civil Protection and Humanitarian Aid operations department (ECHO), the EU has contributed US$33 million (€27.2 million) to WFP operations in the country over the past five years. The EU’s contributions have helped to significantly scale up cash assistance and sustain those affected by conflict and displacement in what is one of the longest-running humanitarian crises in the world. 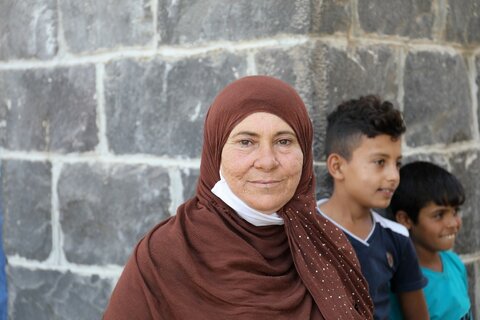 Syria: A woman and her family's constant search for safety