WFP plans to assist up to six million people across the northeast in 2021, with support of donors like USAID
1 October 2021, Ben Anguandia and Elizabeth Bryant
Democratic Republic of the Congo

It has been eight years since armed fighters chased Neema Georgine and her family from their farm in eastern Democratic Republic of the Congo (DRC). So long ago that five of her seven children know no other home than Kizimba displacement camp’s scrum of mud-and-stick huts, perched in the lush hills of Nord Kivu province.

“We decided to stay here until we thought it was peaceful enough to return to Nyanzale,” Neema said of her village, attacked by an armed group that torched houses, stole crops and slaughtered some of her neighbours.

That homecoming hasn’t yet happened. Instead Neema and her family – like hundreds of thousands of others in this turbulent slice of DRC – remain uprooted, surviving on odd jobs, the kindness of host families and assistance from the United Nations World Food Programme (WFP) and other humanitarian groups.

As grey clouds scudded overhead one recent morning, Neema joined other camp residents in collecting key staples that will help tide their families over – 15 days’ worth of WFP-supplied maize meal, beans, oil and salt, thanks to contributions from the United States Agency for International Development, along with other donors.

“The food we have received today is for all the family,” Neema said, adding that she would be cooking fried beans and fufu, a maize-meal dough, later that day. “Tonight my children’s dinner is guaranteed. They will sleep with smiles.”

Of more than five million internally displaced people across DRC – Africa’s highest number – the vast majority live here in the northeast, a stunningly beautiful, resource-rich region that has been battered by a series of shocks, most recently including Ebola and COVID-19.

But years-long unrest remains by far the most destructive force, and the northeast’s biggest roadblock to development – driving people from their homes and fields, and deepening hunger and malnutrition.

“Normally this region would be able to feed itself,” said Erwan Rumen, WFP’s Eastern Area Coordinator, of an area where farmers traditionally grow a raft of crops, including sweet potatoes, beans, cassava and maize. “Normally people wouldn’t need WFP assistance.”

For a while, Neema and her family stayed put in Nyanzale, despite increasingly alarming reports of people being killed and homes destroyed. Finally they fled, leaving almost all their possessions behind. They first settled in a nearby village. Finally, when that too became dangerous, they headed to this displacement camp sheltering some 3,000 people, roughly 40 km away.

“We walked for three days under a burning sun and slept wherever we were when night fell, before we reached this camp,” Neema said. “I pray never to repeat such an experience because it was so horrible.”

She is not the only camp resident with dark memories. Six years ago, Dusenge Akameneza Twisenge and her family also fled violence that gripped her Nord Kivu village Mashango. “After reaching this camp, I heard from other people that everything we left was either looted or destroyed,” she said.

Today, the displaced families are packed into tiny shelters, many with no beds or mattresses. The surrounding community will not let them till the nearby land unless they pay.

So instead, many like Neema and her husband eke out a living as occasional farm labourers, sometimes walking hours to earn less than a dollar a day – money spent exclusively on food. “The children suffer from malnutrition,” Neema said, “because you eat what you can get.”

WFP’s food assistance will allow the family to spend some of their earnings on other essentials like clothes, and to diversify their diet.

Neema still dreams of going home. But no time soon. Family and friends who have returned report that peace remains fragile in Nyanzale, and that they may again be forced to flee. “For now,” said Neema, “my family and I will continue to wait.”

In Nord Kivu’s Masisi and Rutshuru regions where Kizimba camp is located, WFP food assistance in September reached nearly 70,000 displaced people and host families. Of the roughly 8.7 million people WFP plans to reach this year across DRC, more than two-thirds live in Nord Kivu and elsewhere in the country’s northeast. 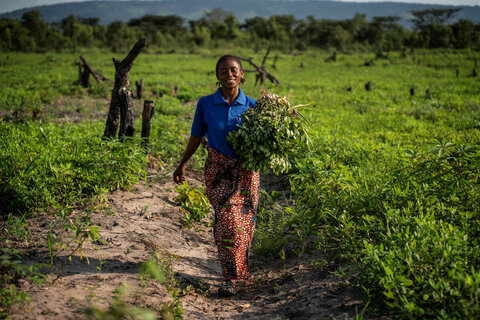 Food for peace: WFP and FAO work to end conflict and hunger in DRC 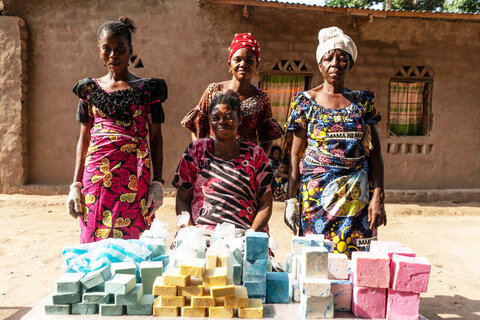 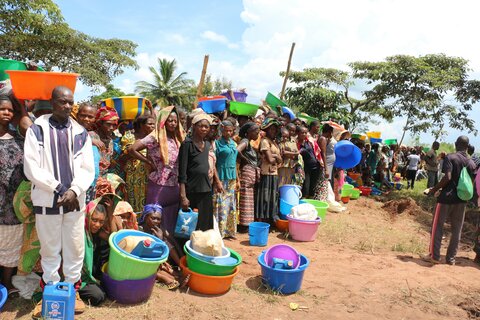