In Gaza: from hardship to hope

Despite hardships in Gaza, WFP vouchers (or Cash-Based Transfers) are a source of growth as much as they are a source of food for vulnerable families who heavily rely on this monthly assistance.

At the age of 17 years, Azza thought that marriage will change her life journey and pull her out of Gaza: out of deprivation and into indulgence.

Azza's husband, Jamil, worked as a driver in Abu Dhabi and she hoped to join him there. But she never did. She stayed in Gaza throughout their marriage and as their family grew, she found herself managing a household with eight children. Jamil visited them once a year and sent them them money every month.

"My husband returned home in 2012 after he lost his job. This unexpected blow made life even harder," Azza recalls. "I worried even more about my children's future and felt helpless seeing my husband's despair over his inability to provide for our most basic needs."

"The food we receive through WFP's electronic voucher has helped me cope and has even given me the peace of mind to come up with ideas that have changed the course of our life," she says while doing her weekly shopping at the neighbouring shop with her youngest daughter Zeinab.

WFP's food assistance is a fundamental safety net for poorer women and children who bear the brunt of the dire consequences of a prolonged conflict in Palestine, sparing them additional human suffering and strengthening their resilience in the face of augmenting hardships.

WFP is providing electronic food vouchers to more than 260,000 food insecure non-refugees in Gaza and the West Bank.

Working — not just hoping — for the best

A few months after her husband returned home, Azza refused to surrender to helplessness and self-pity.

With the help of her eldest son Mahmoud, she started a small business in her own backyard. "Mahmoud helped me buy 12 chickens to raise and sell the eggs to make some extra money," she says. "I am driven by my passion to build a better future for my children, and this small business helps with their school fees."

Thrilled and encouraged by her initial success, Azza embarked on her new project. Six months ago Azza decided to use her distinguished skills in preparing bread and pastries. "I raised the idea with Ammar, the owner of the shop where I use my WFP voucher. He was kind enough to let me sell my pastries in his shop," says Azza. She dedicates Thursdays and Fridays to prepare the dough and bake 120 pieces of pastries.

All for my children

"I will do anything in my power to improve my children's lives."

When asked about what she wishes for, Azza rushed to say "I wish I can have an automatic washing machine because my arms are too tired from kneading the dough".

After a short pause, Azza asked to disregard that wish and talked about her big dream: "My dream is that my hardships abate. I will do anything in my power to improve my children's lives."

Thanks for the generous and long-standing support of donors including Canada, ECHO, France, Germany, Kuwait Red Crescent Society, Multilateral Funds, Spain, Switzerland, the Big Heart Foundation and other private donors, WFP is providing electronic food vouchers to more than 260,000 food insecure non-refugees in Gaza and the West Bank.

Find out about WFP's work in the State of Palestine. 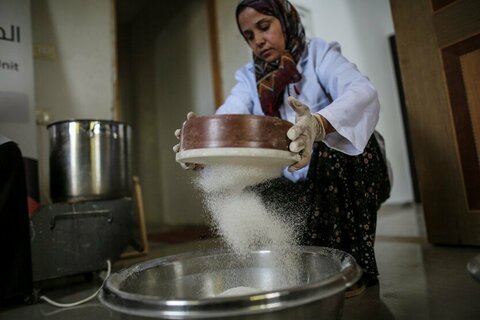