On Wednesday, ministers for foreign affairs and development from G20 countries will gather in Brindisi, on Italy’s southern Adriatic coast, to discuss logistics in humanitarian response — and the challenges highlighted by the COVID-19 pandemic.

Brindisi is home to one of six United Nations humanitarian response depots, strategically located for flights taking humanitarian personnel and cargo to hotspots around the world. Below, we revisit a story published on 23 June 2020 as the base marked two decades.

“What a coincidence... 20 years ago, on this same day, I started working with this organization,” says Nunzio as he recognizes himself in a photo tweeted by the World Food Programme (WFP), a post to thank Italy for generously funding the running costs and providing the premises for the WFP-manged UN Humanitarian Response Depot (UNHRD) in Brindisi. 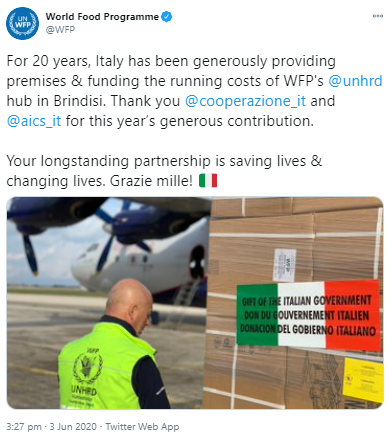 Nunzio has worked here as storekeeper and field responder since day one. Together with Giuseppe C., Lorenzo, Nadia, Pino, Marta and Michele, they were the pioneer team, led by Giuseppe Saba, of what has since grown to become a crucial tool for emergency preparedness and response.

The global UNHRD network as we know it today — with another five hubs located near disaster-prone areas in Accra (Ghana), Dubai (UAE), Kuala Lumpur (Malaysia), Panama City (Panama) and Las Palmas (Spain) — has its roots in a forward-looking initiative taken by the Italian Government in the mid-1980s: to enable UN and humanitarian organizations to pre-position relief items, ready for dispatch, in its Pisa military airport; to swiftly assist people caught in humanitarian crises.

In the late 1990s the depot was moved south to Brindisi, a strategic location in the heart of the Adriatic. At that time, WFP was mandated to manage it, and transformed it into a logistic hub offering supply chain services to humanitarian organizations. The "Brindisi model" was then replicated globally, and the network has since grown from serving an initial five organizations out of Brindisi to working with 93 partners, including UN, Governments and NGOs, from six locations worldwide. 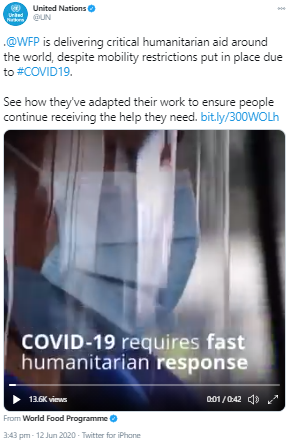 "The very first operation took place on June 20, 2000. I still remember the excitement when that Ilyushin 76 landed. We loaded 36 metric tons of Italian Cooperation's emergency aid and a mobile hospital destined to Asmara to assist Eritreans caught in the border war with Ethiopia," Nadia recalls as she scrolls down a log listing the cargo dispatched that year. "There were eleven more shipments to Eritrea — and then Ethiopia, Burundi, Kosovo, Serbia, Iran, the Democratic Republic of Congo, Guinea and Angola. In total, we managed 46 shipments, delivering 730 metric tons of cargo for three partners." In 2019, the UNHRD network operated 613 shipments, transporting 9,850 metric tons of cargo to 84 countries for 42 organizations. As all her fellow pioneers, Nadia is still with UNHRD, leveraging her unparalleled experience to support colleagues across the network.

Although part of WFP, UNHRD hubs don't store and deliver food, but relief items and support equipment. Blankets, family tents, kitchen sets, mosquito nets and a wide range of life-saving supplies — that's what you find in UNHRD's warehouses across the world. In the cold chain storage, there are medicines and emergency health kits, crucial in case of health crises response. UNHRD also maintains a WFP stock of logistics equipment such as prefabricated modules and storage tents.

When this equipment is shipped, UNHRD rapid responders often deploy with it. Many times, they are the first to reach disaster areas, rapidly installing the equipment to allow WFP and humanitarian organizations to kick-start activities. In January 2001, Pino was deployed to India in the aftermath of the Gujarat earthquake. He took part in the first UNHRD field mission — one he will never forget. "Soon after the WFP depot was established in Brindisi, I joined for a short-term contract … and here I am, 20 years later. Beside working as logistics assistant, I continue to deploy to support field operations. I have lost count of my field missions but, as for many, the 2004 Tsunami was a life-changing experience: there we understood the meaning of the word apocalypse."

Less than a year after that disaster, in October 2005, a powerful 7.6 magnitude earthquake shook the Kashmir region in Pakistan. Giuseppe C. was deployed to Muzzafarabad to set up the response equipment. "The tremors didn't stop for a while," he recalls. "We slept in tents and sometimes our camp beds shifted by as far as on meter during the night! On a colourful note, it was a unique experience, with traditional jingle trucks driving around, loading and unloading cargo in the storage tents we had just installed."

"The response to those two catastrophic events — and to the crises in Darfur and Niger that happened between them — confirmed that what Italy and WFP had developed in Brindisi was a successful, effective and unique tool which allowed to rapidly respond to emergencies, and that preparedness was the way to go. We just needed to make it even more efficient," says Carmelita, who witnessed the lively discussions at the time. She joined the UNHRD pioneers in November 2001 and is one of the custodians of UNHRD's memory and archives.

Increasing efficiency — in line with the vision held by WFP's then Director of Logistics, Amer Daoudi — meant operating closer to the affected areas to reduce response time and costs, having multiple bases from which to respond to simultaneous emergencies, and expanding storage capacity to avoid the risk of ending up with empty warehouses as had happened in 2005. The Brindisi model needed to be replicated in other areas of the world, and so the UNHRD network of humanitarian hubs was born.

Marta, who manages the UNHRD Brindisi Hub and has just been appointed as UNHRD Network Coordinator — the first woman ever in this role — emphasises that "we are not just living on past glories: Brindisi is still a driving force." The hub hosts the unit supporting the other five in procurement, finance, human resources, admin and travel. It was the first in the network to host trainings and simulations and has become a centre of excellence for WFP staff and humanitarians from all over the world to train for the field. It also hosts the UNHRD Lab, an innovation unit partnering with academia, humanitarian organizations and the private sector to improve logistics support, equipment and packaging, and integrate green solutions.

From the pioneers to the newly arrived staff, whether sitting at their desk to make deliveries possible and support colleagues across the Network, working in the warehouse or deploying the field, the women and men at UNHRD have countless stories to tell. If past results are a foundation for future success, taking a lead from Brindisi, UNHRD has a solid path ahead.

About the author: I joined UNHRD in Brindisi, in May 2017. As I was tasked to create the so-called "UNHRD Museum", I enjoyed tracing the hub's history through official documents and, more excitingly, by listening to the pioneers mentioned in this story and many others. By sharing with me their memories, they immediately made me feel part of a family — a family I'm honored to be part of.