The combined effects of the COVID-19 pandemic and the civil unrest that followed February’s military takeover are placing huge pressures on Myanmar’s economy.

Amid a rise in unemployment and food prices, the most vulnerable sections of the country’s population are suffering most.

Armed clashes have displaced more than 200,000 people. The World Food Programme in Myanmar is scaling up its response

It’s two months since Ma Moe left her home in an impoverished neighbourhood on the outskirts of Yangon.

Her husband, Ko Min, worked as a bricklayer. Now he can only hope to bring in income doing odd jobs here and there.

Today, as usual, Ma Moe stays at home with their 6-year old son and girl, aged 2. Ko Min heads out to get food for the family. With barely any money between them, there are no trips to the market.

At a nearby swamp, he plucks a handful of water spinach. It is a common vegetable in Myanmar and throughout southeast Asia, flourishes in waterways.

In normal times, water spinach is used as feed for livestock. But now, it will be lunch for this young family.

On the way back home, Ko Min stops by a neighbourhood kiosk and buys half four eggs. “These are for the children,” he says.

When he gets back home, Ma Moe starts to prepare lunch. She cracks open the eggs to make an omelette with chopped onion.

And then she serves the gently boiled water spinach with the rice received a few days ago in a World Food Programme food-assistance pack.

“It has been a long time now since we last ate fish and meat,” says Ma Moe.

Ko Min adds: “If I can’t go and pick water spinach, and don’t have any vegetable to eat, we pour cooking oil and salt into the rice and feed the children like that.”

Since February, food prices have been rising throughout Myanmar, placing basic foods out of the reach of the poorest people.

The price of cooking oil is up 47 percent while rice is up almost 20 percent on the same period last year.

The current political crisis has exacerbated the job cuts and lost incomes resulting from the COVID-19 pandemic. (Myanmar is currently in the grip of the  third wave of the virus.)

In response to this situation, WFP has ramped up its support, with the intention of reaching an additional 2 million people mainly in urban areas, including Yangon and Mandalay. Some 360,000 people affected by conflict have already been receiving food assistance as part of WFP’s regular programmes.

“We parents can live without food, but children can't,” says Ma Moe. “So we must find a way to feed them.”

More and more parents like Ko Min and Ma Moe are eating reduced portions or skipping meals so that their children can eat. WFP monitoring has found that people are increasingly resorting to such desperate coping tactics.

In one recent study, more than half of the households surveyed in Yangon said that they were in this situation, borrowing money, spending savings, or selling properties, just to put food on the table.

“Most people in my neighbourhood are also struggling,” says Ma Moe. “When we don’t have enough to eat, we just share what we have with others. Life is like this.”

Due to both a lack of humanitarian access and funds, WFP has been unable to reach everyone in need of assistance, particularly those newly displaced by armed clashes in different parts of the country. Since February, more than 200,000 people have been forced from their homes.

“Never before did I have to pick water spinach and eat it as food,” says Ko Min. “If the situation gets any worse than this, I will have to resort to begging… I cannot be shy anymore. It’s for my family”. 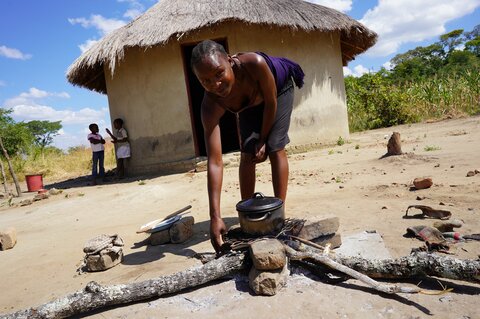