How WFP and its UN partners are working to bring refugee and host communities together - fostering food security in the process
20 June 2022, Elizabeth Bryant
Democratic Republic of the Congo Central African Republic

Florida shaves off the rough skin of a manioc root, then cuts the tuber into small pieces to dry in the sun. Later it will be turned into fufu, the doughy food that is a culinary staple in central Africa, including in this northwestern slice of the Democratic Republic of the Congo (DRC).

It's been nearly a decade since Florida fled conflict in neighbouring Central African Republic (CAR) that simmers on today. Overall, DRC hosts more than 210,000 CAR refugees, their fluctuating numbers mirroring the ebb and flow of the fighting next-door.

For Koyakpo, home for the foreseeable future is a mud-brick hut in a sprawling refugee camp here in Nord-Ubangi province, which shelters 18,000 Central Africans like herself.

“We have work in our country,” says Florida, who was a food vendor in CAR’s Basse-Kotto region, just across the Ubangi River separating the two nations. “But here, we’re blocked.”

For a while, the refugees faced tensions here as well, as they foraged for firewood and fished local waters to help get by. That did not sit well with the Congolese residents of nearby Inke village, whose population of fewer than 3,000 is dwarfed by the camp.

Disputes over natural resources quickly escalated. Transforming the increasingly corrosive relationship between villagers and refugees has been a complex, multi-pronged effort, involving reconciliation committees, resilience projects, good will and the support of humanitarian agencies like the World Food Programme (WFP).

“When the refugees arrived, the refugee women did not approach the local women, and vice versa,” says Blanchard Asengo, Head of Programmes at WFP’s office in the provincial capital of Gbadolite, roughly 45 km away. “But after everything the project has done in terms of training and awareness-raising, we now see local women and refugee women learning and working together.”

In this area and elsewhere across the country, WFP and partners have been implementing programmes that ensure people not only receive food, but are able to produce their own. From repairing farm-to-market roads, tilling the soil, constructing warehouses to store grain or getting basic lessons on literacy, refugees and locals are encouraged to work together. This year, more than 71,000 people in the Ubangis have benefitted from WFP resilience activities.

On a recent morning, Inke villagers greeted guests with a staged display of their achievements. A packed audience laughed as locals and refugees tangled in the dusty ground, then clapped resoundingly as a mock reconciliation committee resolved the dispute.

“At the beginning, relations were difficult,” says Inke village Chief Juppe Kitaba. “It was through the committees that refugees and locals first started to be in contact with each other. Through the awareness-raising, people learned to live with each other peacefully.”

At Inke refugee camp, Florida agrees the effort has been transformative.

“At the beginning, the locals were very mean,” she says. “There’s water and game here. But when we tried to fish, it was a problem.”

Today, she says, development projects  — also supported by WFP's sister agencies the Food and Agriculture Organization and the UN Refugee Agency — include both refugees and locals. The initiatives supplement WFP cash assistance to refugees, averaging between US$6-US$10 monthly.

At Inke village, Abeshofia, a divorced mother of two, says she has a few refugee friends. They share a plot of land where they plant corn, manioc and groundnuts. As she talks, she pours sugar into tiny plastic bags. Her two-year-old daughter sleeps nearby.

The bags will be sold at market for a few cents apiece and it's critical income for Ute to support her family. Through support from WFP she has learned to read and do mathematics. For women in her community this is the training they need to start and build their own small businesses.

“My parents never sent me to school,” says Uta. Now, a large chalkboard hangs from a wall of her house.

“At the beginning, it was hard to read. But we had three lessons a week,” she says. “I can now write the alphabet from A to Z.”

“Women have a bigger voice in their communities” says WFP’s Asengo, describing larger pay-offs from the project. “They’re speaking out to offer their experiences. Women’s leadership is manifesting itself.”

At the refugee camp, residents are also seeing change. Former food vendor Florida is getting used to farming. But her future plans still depend on events back home, where widespread unrest pits multiple armed groups against each other.

“If [there is] no disarmament, then we have insecurity,” she says, and the family will stay put in Inke. “But if disarmament happens, then I’ll know there’s peace in Central African Republic.”

WFP's resilience activities in the Democratic Republic of Congo are supported by Canada, Germany, Italy, Norway and Sweden.

Read more about WFP's work in the Democratic Republic of Congo 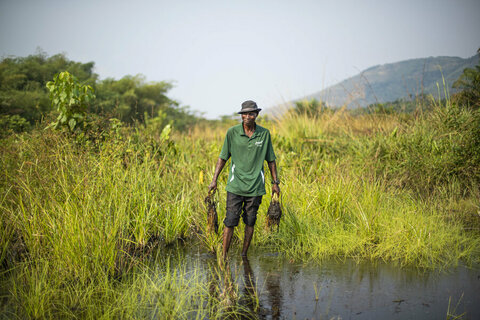 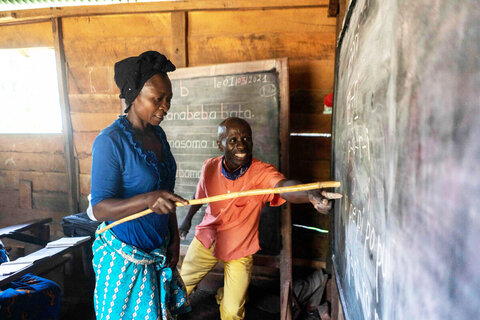 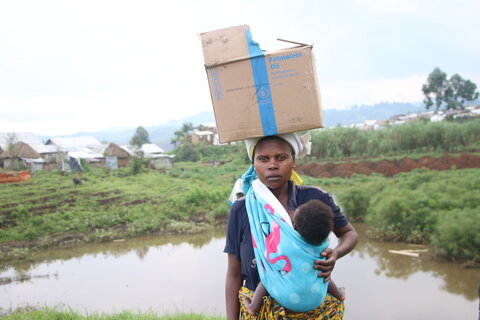