It's market day in Azam Kura. Clasping his hands, Lawan Mal, the village headman, watches with delight as buyers and sellers converge on the newly constructed marketplace. Azam Kura is a remote community of low-slung mud brick houses, situated in an expanse of flat sandy savannah in the north of Yobe state, close to Nigeria's northern border with Niger.

Despite its isolation, a wide range of commodities are on sale here, ranging from colourful fabrics, machetes and carved calabashes to groundnuts, spices and fresh mangoes.

"The new market has breathed fresh life into the village, it is attracting trade and boosting local incomes," says Lawan Mal. "People are coming here from over 20 kilometers away who have never been to the village before. I'm seeing so many new goods that we could never buy before, there is even a barber!" he exclaims.

"Local people themselves identified the infrastructure projects that they felt would bring the most benefit to the community as a whole," explains Emmanuel Bula, WFP's Livelihoods officer.

The projects are low tech and low cost. On completion, each one is managed by a committee comprised of members of the host community and displaced people. The aim is to build social cohesion and solidarity.

Five years ago, 44-year-old Usman Bulama fled his village in Borno with his two wives and 15 children. He was among the 35-strong workforce from the community involved in the construction of the marketplace. In exchange for 15 days of labour, his family received a monthly cash transfer from WFP to buy food. Now, Usman sits with his father on the cement floor of one of the concrete market stalls. Both are scraping out calabashes made from dried gourds, used locally to hold food, water or milk.

"In a few hours I have already sold twice the number of calabashes that I used to sell in a day in the old market," says Usman. "It's better here, we have shade from the sun and the market is attracting plenty of new customers."

In a neighbouring stall, Nasiru Adama, 50, is doing a brisk wholesale trade in dried chillies. He too was displaced from his village in Borno.

Until recently Nasiru struggled to support his family, despite receiving monthly food support from WFP and working as a day-labourer on local farms. Now, he is fast establishing a reputation as a trader in perishable goods.

"I used to go around farms buying chillies from farmers, now they are coming directly to sell to me in the market. Business has never been better!" laughs Nasiru, who will take his sacks of chillies to sell at a good price in the town of Gashua, 20 kilometers away.

In the nearby village of Azbak another WFP project is enabling 20 internally displaced families to start farming on land donated by the village. Inputs to the project included the sinking of two boreholes, irrigation pumps, water storage tanks and distributions of vegetable seeds.

One of those to benefit from the project is 75-year-old Maina Bulama, who arrived in Azbak four years ago having fled his village in Abadam in Borno, where he had two wives and nine children.

"We had to run for our lives," he says. "I had no choice. What do you do if teenagers came to your village and threatened you with guns? I remember passing five corpses when we left. They were all people I knew."

In the panic to escape, Maina was separated from one of his wives and four children. A few months ago that he found out what had happened to them. They had managed to cross the border into Niger.

"A friend of mine, a truck driver, who is from our village, saw my wife by chance in the street in the town of Gegime. She called me using his phone. Alhamdulillah (Praise be to God), I thought they had all been killed."

In the next-door plot, 60-year-old Kulu Isah is one of the few women working in the fields. She is cutting spinach which she planted a few weeks ago together with some Hibiscus.

Three years ago fighters from an armed group came to her village in Dorom Baga in Borno and abducted 130 people across the border into Chad. Among them were her husband, daughter, son-in-law and three grandchildren. Since they were taken she has had no contact with them. Now she lives in Azbak, with her nine surviving children and seven grandchildren.

Irrigation farming will allow vulnerable households such as Kulu Isah's to grow produce all year round. She is clear on how she will use the profits from the sale of any surplus.

"I will use the money to search for my family. That's what I must do, I will not give up looking for them," she says defiantly.

In the town of Gashua, WFP's livelihoods programme has been supporting communities to rehabilitate the town's main primary and secondary schools as well as two community health centres.

The Garin Lamido health centre has had a face-lift and a new, shaded waiting area has been built for women participating weekly sessions to combat acute malnutrition. Ibrahim Babaharuna, a government health worker is busy with colleagues weighing and checking infants for signs of malnutrition.

Over 220 displaced women in the area are enrolled in the programme which includes weekly rations of nutrient rich cereals provided by WFP for their children. At least 50 displaced people living in the area worked on the renovation of the facility.

"Women never used to like coming here, because there were no toilet facilities or water, and no shade to sit under," says Ibrahim Babaharuna.

The health centre now has running water for the first time after a borehole was installed.The project has also helped to build relations between people in the host community and the displaced people living amongst them.

"The host community used to see many of the migrants as beggars but now they really appreciate the contribution they have made towards rehabilitating the health centre. Everyone is benefiting," explains Babaharuna.

Built in 1946, Gashua's Umar Suleiman Central Primary School is in a woeful state of disrepair. Many of the classrooms are unuseable and with over 5,000 pupils and 100 teachers, the few functional classrooms are extremely congested.

Over the past month, 90 displaced people have helped to renovate two classroom blocks as well as the school offices. A borehole and new toilet facilities have also been installed.

"The situation got so bad that children were defecating on the ground outside the toilets because they were in such a sorry state," says Zainab Kaigama, the assistant head at the school. "The renovations have now attracted the attention of parents in the area. Now, more local people and migrants are sending their children to school every day."

Down the road at the Government Day Secondary School, Vice Principal Abdulrahim Musa surveys one of the school's dilapidated classrooms.

"The roof collapsed last week. Luckily there were no students in here. Almost half the classrooms in the school are not fit for use anymore," he says resignedly.

Work has just been completed by a mixed team of displaced men and women who have renovated two classroom blocks comprising four individual classrooms. Over 50 students aged between 18–20 years are crammed into one of the classrooms, seated four to a desk.

Despite the cramped conditions, 18-year-old Dauda Hashimu Sani sees the renovations as a big improvement. He has ambitions to go to university and join the Nigerian Police.

"The floor here used to be bare sand and there was just a tin roof with no ceiling. It was too hot to concentrate and the roof leaked during the rainy season," he says.

In the village of Kukareta, WFP is supporting income generating activities that are helping displaced people and some members of the host community, to transition from reliance on food assistance towards greater financial independence. Individuals are being helped over a few months through training and material inputs, to get started in their chosen profession.

Gubtu Bura, 22, is concentrating hard as she runs a piece of cloth through her new sewing machine. Gubtu used to be a seamstress in her hometown of Goneri in Borno State before fighting in the area forced her family to leave and settle in Kukareta.

She had to leave her precious sewing machine behind when the family fled. For the past four years she has had no income, but in February she received a new sewing machine together with training in making different styles of women's clothes. She now runs a thriving tailoring business from her home.

"Some weeks I can make about US$ 20 profit. Part of the money I use to buy my children books and school uniforms, the rest I spend on food for the family and reinvest in the business," explains Gubtu. "I used to rely on my husband for everything but now I can make decisions for myself'.

Mustapha Malumbe, sits crouched over a huge wok-like pan filled with smoking oil. He carefully drops in some spoonfuls of ‘pancake mix' which splutter as they hit the boiling oil. After a couple of minutes, he scoops out the deep brown crispy dough-balls from the oil and serves them piping hot to his waiting customers on a piece of paper, sprinkled with sugar or chilli.

Over the past two months business has been brisk for the 50-year-old. Back in his village of Damboa in Borno, he used to be a baker, but arriving in Kukareta with his wife and six children four years ago, Mustapha was unable to raise the capital to rent a premises and equipment to restart his business. Through WFP's livelihoods programme, he was given cooking equipment and a bit of training in how to make the perfect pancake mix, using flour, water, sugar and yeast. He was also given some marketing advice.

"If someone buys four dough-balls, I will give them an extra one," he says with a broad smile. "It's important to keep your customers happy so that they keep coming back."

Now his profits exceed US$ 30 a week, almost three times what he was earning as a casual labourer.

Across the road, 33-year-old Ali Mustapha is giving a young teenager a close crop with electric clippers. Ali is a migrant from Borno. He had been barbering for five years but with limited tools. In February he was given some equipment including a new electric clippers a table and mirror together with a three-week training course.

"Now, I no longer have to work for someone else. I have set up business on my own and I have about 25 clients each day. My earnings have increased by at least 50%." 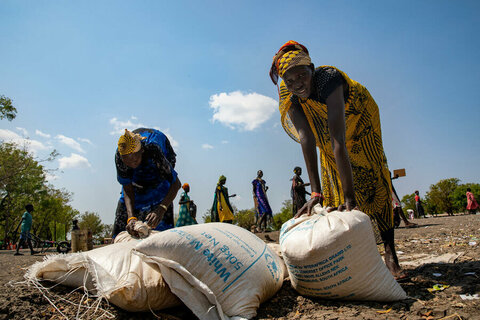