Julienne is one of more than 13,500 schoolchildren benefitting from the addition of fortified wholegrain maize in their daily school meals - children who live in the most food insecure regions of the country.

Maize is a staple food for most families in Rwanda and can be eaten as a porridge or served as an accompaniment to meat, vegetables, and beans.

However, most of the maize consumed in Rwanda is refined, unfortified and lacking vitamins. Yet fortifying wholegrain maize can cost the same as refined versions and needs less processing.

The World Food Programme (WFP) and The Rockefeller Foundation are playing a key role in changing nutritional attitudes and behaviour with the introduction of a pilot project to integrate fortified wholegrain maize into the diets of children in 18 schools in Nyamagabe and Nyaruguru districts of southern Rwanda.

Access to nutritious foods is a key component of the Government’s priority to reduce malnutrition rates in the country from 33 percent to 20 percent by 2030.

Results from the pilot are impressive, with 73 percent of children now aware of the nutritional benefits of eating fortified wholegrain foods and 97 percent preferring it to the refined equivalent.

“I am happy about the fortified wholegrain maize, it is very tasty and nutritious,” says Julienne. The project also includes an educational component for parents to help them understand the importance of including fortified wholegrains in a healthy diet.

“The more nutritious foods children eat, the more active they are, and they perform better in school too,” says Faustin, Julienne’s father.

Many parents like Faustin are also keen to use wholegrains in their home cooking.

“I like the taste of the wholegrain maize and I would like to add it to the food we eat at home so that Julienne’s siblings can also enjoy,” he says.

There are benefits for the economy too. The fortified wholegrains are purchased from a local miller who buys the maize from smallholder farmers throughout Rwanda.

In October 2021, the Government of Rwanda launched its National School Feeding Programme which provides school meals to 3 million children in all pre-primary primary and secondary schools.

Based on the successes of this pilot, WFP and The Rockefeller Foundation will increase their provision of fortified wholegrain maize meal to support 41,000 children in 49 schools in the Nyamagabe and Nyaruguru districts of Rwanda.

WFP supports 117,000 children in 136 schools in Rwanda with daily nutritious school meals through its homegrown school feeding programme. This is a form of resilience-building for communities – empowering people with the agricultural skills and resources they need to become self-reliant and supplying schools with the ingredients they need to facilitate a diverse diet for the children. 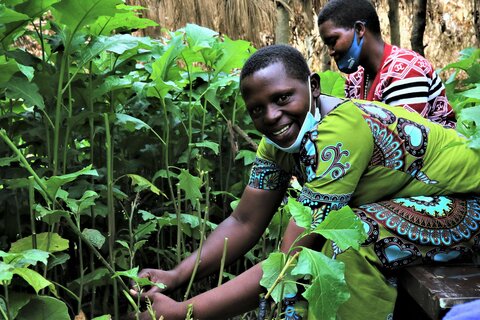