South Sudan: How WFP is working with farmers to counter climate change

Tucked away in the northwestern corner of South Sudan, the village of Ayok-Hong, in Northern Bahr el Gazal State, is hot throughout the year. Unpredictable rainfall over the past few years has put precious property, crops and livestock at risk.

As the climate crisis sweeps across the world, developing countries that contribute the least to global warming are bearing the brunt of its devastating impact.

Record floods for three consecutive years have displaced thousands of people, drowning hectares of crops, livestock and villages. Such climate shocks are compounding an already fragile food security situation in a country where 7.2 million people, 60 percent of its population, are going hungry.

In response to the climate crisis, the World Food Programme (WFP) is implementing programmes to support countries and communities to anticipate climate hazards, restore degraded ecosystems and protect the most vulnerable against climate extremes.

“Climate change is a reality we must contend with as the future requires climatically conscious farmers,” says Matthew Hollingworth, WFP Country Director in South Sudan. “Bringing communities up to speed on the latest agronomical practice is critical as we expand our livelihoods activities to enable families to produce their own food and sell any surplus at market.”

WFP, in partnership with Irish humanitarian agency Concern Worldwide, is supporting 900 farming families in Ayok-Hong village to improve their food security and to build resilience against climate shocks such as floods and drought in agriculture.

Farmers are trained in farming practices such as timely planting, crop spacing, mulching, mixed cropping, and irrigation techniques such as shallow wells.

“We train farmers on crop management techniques based on the type of soil and climate in their area,” says Manase Kollang, a Programme Manager at Concern Worldwide. “For example, some types of soil cannot hold moisture for long periods of time.

“We also promote organic methods for pest control such as using neem and wood ash.”

Farmers like 60-year-old Abuk are already benefitting from such ‘climate-smart training’. Unable to access water in the dry season, Abuk could only harvest around five bags of sorghum, which was never enough to sustain herself and her seven grandchildren between harvests.

“I used to grow sorghum only,” says Abuk. “But yields were low due to poor farming methods and extreme weather conditions.”

Abuk and her community were introduced to dry season vegetable production – enabling farmers to access water from shallow wells even in the dry season.

“Now I can grow sorghum and groundnuts to sell and even some leafy greens, okra, tomatoes, and onions for my family to eat,” she says.

With access to water, seeds and technical training, Abuk now harvests 15 bags of sorghum and 17 bags of groundnuts, which gives her an income of US$60 per month.

WFP supports 16,000 families in Northern Bahr el Gazal State and Twic County of Warrap State, through the WFP and FAO Brace II project which is generously supported with funding from the United Kingdom's Foreign, Commonwealth and Development Office 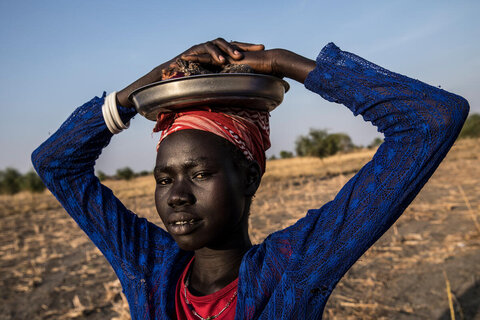 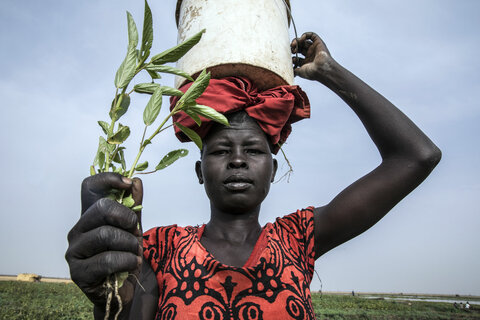