Conflict breeds hunger, it destroys livelihoods, disrupts basic services such as healthcare and education, and forces people from their homes.

Mohammed should know – he was forced to flee his village in eastern Sudan after conflict broke out in 1994 between the East Sudan Front and the Sudanese Government.

“Besides our family becoming separated, the most difficult thing was leaving our homes and village and not knowing when we would return,” says Mohammed.

The signing of the Eastern Sudan Peace Agreement in 2006 brought an end to conflict but not to hunger. Today, Mohammed’s village of Tahadai Osis is one of the most food-insecure places in eastern Sudan, where over 65 percent of children are affected by stunting (impaired growth and development that children experience as a consequence of poor nutrition).

Still, by 2014 Mohammed felt safe enough to return to his village. Seven years on, however, he finds he is struggling to make ends meet.

With “no [formal] education it has been very hard for me to provide for my family’s day-to-day needs,” he says.

In 2019, the World Food Programme (WFP), with funding from the European Union, launched a project to address the causes of food insecurity and malnutrition in eastern Sudan.

Cash assistance was provided to 350 Tahadai Osis residents as they worked on local infrastructure projects such as rehabilitating a school and the school’s farm, repairing a solar-powered water tank, building pipelines to connect the village to clean water, and building flood prevention measures such as earth-retaining walls and soil dams.

The community were introduced to poultry farming and educated on the nutritional benefits of eggs which are not traditionally consumed in this region. Some of the eggs are used to make breakfast for children at a nearby WFP-supported school and any surplus is sold on, with profits ploughed back into the farm.

Mohammed and his wife Madina have started their own poultry farm which enables them to improve the diets of their three daughters – one of whom suffered from malnutrition before the family sought help at a WFP-supported clinic.

“I cook the eggs for my daughters who really like them,” says Madina, “We sell any extra eggs which enables us to buy other basic necessities.”

Children aged under-5 and pregnant and breastfeeding women are also screened for malnutrition at a WFP-supported clinic in Tahadai Osis. Those affected are provided with nutritional supplements that are packed with vitamins and minerals and rich in protein.

Community volunteers also go door-to-door educating families on the importance of a healthy diet and hygiene measures which help to prevent malnutrition.

“Volunteers came to my house and taught me about the importance of screening my children for malnutrition and how to prevent it,” says Madina. “I am now more aware of my family’s health and nutrition needs.”

Improving the food security of families like Mohammed’s has contributed to peace and stability in the region and is encouraging others who fled conflict to return to their villages.

“WFP has helped us to establish a foundation for our community to thrive,” says Karrar, a poultry-keeper from the village. “Access to clean water supports our livelihood activities and we have learnt how to rear chickens and to grow a variety of vegetables which has improved our diets.”

WFP’s activities in Tahadai Osis village are part of a project entitled ’Improving nutrition and reducing stunting in eastern Sudan through an integrated nutrition and food security approach’. This work has been possible thanks to generous contributions from the European Union and the work of WFP’s implementing partner Sudan Vision. 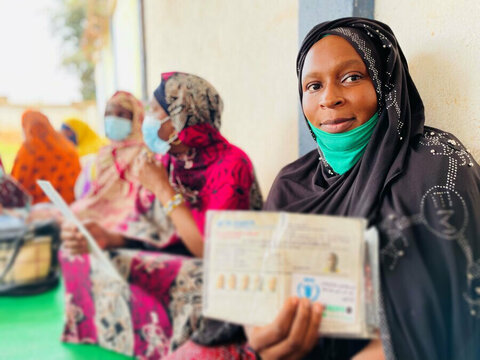