Why US$81 a month from the World Food Programme is a lifeline for one woman’s family in a country where conflict continues to force people away from their hometowns
23 November 2022, Hedley Tah
Democratic Republic of the Congo

Four years ago, Marie Jeanne lived in her hometown of Kahanga – in the Democratic Republic of the Congo (DRC)’s Équateur province. There she grew crops to make sure her family could eat. Then violence broke out. They were all forced to flee.

Today, along with 2,000 displaced people in the Kibabi camp, Masisi territory – in North Kivu province – home is a tarpaulin shelter. With her four children and her husband, it’s a cramped space, but Marie Jeanne is just glad they “all got here safe”.

I catch up with her as she empties a sack of potatoes. “Not everyone was that lucky,” she says. “When you are alive, there is hope.”

The fresh weather and sun seem to reflect her hopes – she is among 26,000 people receiving the equivalent of US$81 for her family of six from the World Food Programme (WFP) in Katoyi district this month.

Violence in this part of the country is a key reason many do not have adequate access to food. In DRC, 26 million people are food insecure – more than anywhere else in the world, with more than 5 million displaced.

This year alone, at least 1.5 million people had to leave their homes as Government forces clashed with armed groups in the eastern border towns.

Wave after wave of people seek shelter – in schools or even in open fields with no protection from the rains. In Kibabi, Marie Jeanne hoped to earn some cash helping people move their belongings – but of course, the pay was neither enough nor regular.

“There are times when you go to work but you come home without being paid,” she says. “You then sleep hungry. Sometimes the money you are paid is not enough and cannot feed you properly.”

In such circumstances, WFP cash transfers are a lifeline.

People can buy food but also put a little away for livelihood activities such as starting up small shops or rearing livestock. It is on such work that long-term food security depends.

“Thanks to the money we receive monthly from WFP, many [of us] are no longer in the situation we once were,” says Marie Jeanne. “Some have started small businesses, others have bought livestock. Today, the children eat well and everyone is happy.”

With support from partners like the European Union, WFP reached more than 1 million people with cash in DRC this year. The money provides people with choice over what they eat and a say in the assistance that affects their lives, while helping towards needs such as healthcare and education.

“With the cash I have received, I plan to buy goods for a small business so I can diversify my income sources”, says Marie Jeanne as she feeds her baby with potato porridge. “And when my sheep give birth, I will sell them, make more profits so I can buy a piece of land. I don’t intend to spend the rest of my life in this camp.”

This year, WFP plans to support more than 8 million people in DRC to access food, improve their nutrition and set the pace for their long-term resilience, making sure that they can transition from humanitarian assistance to independently providing for themselves. 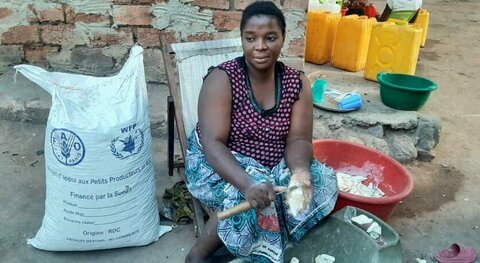