World Food Programme cash assistance is a lifeline as families struggle with cost of food
11 May 2021, By Claire Nevill
Emergencies Food Prices

A ray of sun spills onto 3-year-old Delight’s face as her mother, Angela, hands her a piece of homemade “mealie meal” — ground maize — cake.

Still warm from the stove, it’s a filling snack for Angela’s five children — she herself has become used to going without.

Angela smiles into the light. “We can’t afford electricity these days, so we’re getting used to the darkness,” she says.

The family live together in a cramped, single-room house in the busy urban hub of Mtapa, close to Gweru, capital of Zimbabwe's Midlands Province. Angela’s husband left her last year. Now her only source of income is selling cooking utensils she carves out of wood, or brooms she buys to sell on.

“As a single mother, life is difficult because of all the problems,” she says. “It is painful because I was struggling to feed my children. [My daughter] comes and cries, ‘Mum, I want food.’ But I don’t have any food to give her when she wants to eat.”

While Zimbabwe’s rural areas are looking ahead to a fruitful harvest season, after months of incessant rains, people in urban areas are unsure of where their next meal is coming from.

WFP's latest ‘Cost of a Plate of Food’ report reveals that a meal costs a working person in Zimbabwe nearly 22 percent of their income. That’s like someone in New York State paying more than US$46 for their lunch.

Before the World Food Programme (WFP) extended the reach of its cash assistance — transfers or electronic vouchers worth US$12 per person — into Gweru in August, Angela was skipping meals so that her children could eat; a risky move for a diabetic.

“I couldn’t afford to feed us all, let alone the foods the doctor was advising me to eat,” she says. “So I would sometimes feel really unwell, with no energy.”

And she is not alone. WFP assists 326,000 Zimbabweans, but the latest national analysis of urban food insecurity shows that about half of all residents of residents of urban areas in Zimbabwe — roughly 2.4 million people — go to bed hungry.

This is 12 percent more than a year ago, when COVID-19 first struck the country. Over a quarter of the country’s urban residents are resorting to skipping meals almost daily, and only 54 percent are eating an acceptable diet.

With an already spiralling currency, the arrival of COVID-19 only exacerbated Zimbabwe’s economic instability. It's proved particularly devastating for people in urban areas, many of whom were already living hand-to-mouth, working multiple jobs in the informal sector.

In a country beset by crises and food insecurity, the World Food Programme and its partners are empowering people with farming and business skills

Loss of livelihoods coupled with food-price inflation and the higher cost of living means the food insecurity of urban poor has plummeted.

Inflation remains astonishingly high at 241 per cent, and continues to exert pressure on poor and vulnerable households as they adjust to a volatile currency.

By the end of March 2021, an estimated 2.4 million people were struggling to meet their basic food needs, coping by skipping meals, selling their hard-earned assets and taking their children out of school.

Since moving from a rural area to her current urban neighbourhood, Angela has been struggling to pay for the overwhelming cost of living in the city, chiefly water, electricity and food. It has become more and more difficult for her to put food on the table for her family.

Now, with WFP’s help through cash transfers, they can all eat three meals a day and Angela can afford healthier foods that don’t aggravate her diabetes.

“Look at the skin of my children,” she says. “They are now healthy … now I can eat three times a day and I can eat some of the recommended foods that the doctor said I must eat.”

She adds: “I use the money from WPF to buy food, and I put the other money I make towards my small business. So when the programme goes away, I’ve got something to live on with my children.”

WFP plans to scale up to reach at least 550,000 people living in the 28 worst affected and food-insecure urban areas in the country as soon as it has the resources to do so. Also planned is training in income-generating activities. These include supporting urban agriculture through vegetable farming, building market links between rural-urban food value chains, setting up savings-and-lending groups and entrepreneurship training to support the establishment of small businesses.

WFP is able to deliver its urban social assistance programme thanks to support from the UK, Japan, US, UN CERF, Canada and Switzerland. 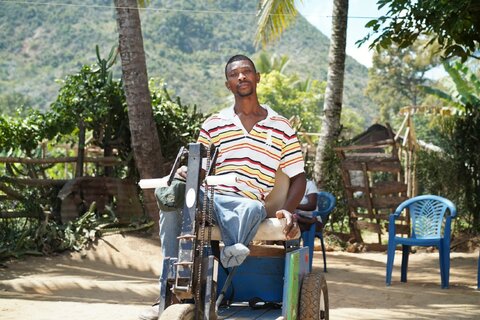 How school meals are empowering girls in South Sudan