Guided by the national concept of “gross national happiness”, the small Himalayan Kingdom of Bhutan has achieved rapid economic growth and a reduction in extreme poverty levels over the last decade. Investments in health and education and a peaceful transition to a democratic constitutional monarchy have resulted in a reduction in poverty from 23.2 percent to 8.2 percent during this time.

The Government has expressed its firm commitment to achieving the Sustainable Development Goals (SDGs) by 2030. However, the impacts of climate change are expected to lead to more frequent and intense disasters that threaten to reverse Bhutan’s progress to date. The majority of the population depend on the agricultural sector to survive, and protecting the country’s food and nutrition sector is an important step towards reaching Zero Hunger across the country.

Malnutrition levels have substantially reduced in recent years. Stunting of children under 5 has decreased from 33.5 percent in 2010 to 21 percent in 2015. Anaemia remains a severe public health issue and according to the World Health Organization (WHO) 44 percent of children under 5 and one in three adolescent girls are anaemic. Health problems related to a lack of balanced diets and lifestyle changes continue to pose challenges to the achievement of SDG2, and non-communicable diseases account for 70 percent of the reported disease burden across all age groups.

Bhutan is located in one of the most seismically active zones in the world, and recent moderate earthquakes have focused attention on this ever-present threat.

The World Food Programme (WFP) has been working with the Royal Government of Bhutan for more than 40 years. This partnership has focused on providing school meals to thousands of children across the country in order to boost school attendance and reduce levels of malnutrition.

In January 2019, WFP handed over its school meals programme to the Government, who will continue to provide nutritious meals to children each day.

WFP will now support the government’s graduation from least developed country status to lower middle-income status by 2023 by providing capacity development in nutrition and emergency preparedness and response.

Show more
825,246
population
44.1%
of children under 5 are anaemic
70%
of the reported disease burden in Bhutan is caused by non-communicable-diseases
Download country brief

What the World Food Programme is doing in Bhutan 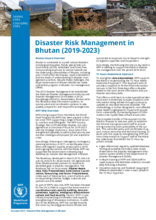 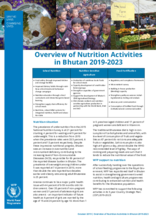 Overview of Nutrition Activities in Bhutan 2019-2023

Achieving Zero Hunger is the work of many. Our work in Bhutan is made possible by the support and collaboration of our partners and donors, including:

Find out more about the state of food security in Bhutan