The war in Ukraine has had drastic consequences, both for people inside the country and for those around the world dependent on its huge grain supplies.

It has caused one of the fastest forced population movements since the Second World War. Close to 8 million Ukrainians are living as refugees across Europe, and another 5.9 million are internally displaced. Many are destitute, having lost their homes and livelihoods. As food production and supply lines are disrupted by fighting, many families in the east and south do not have reliable access to nutritious food.

WFP uses a flexible mix of food and cash assistance to support vulnerable people wherever they are. This includes working with local partners to distribute food rations in areas near the frontline, and providing cash transfers wherever people have access to banks and markets to buy food.

Ukraine is usually one of the world's major breadbaskets, producing enough food to feed 400 million people per year prior to the war. The war has drastically cut supplies for countries in acute need, while driving up food prices. WFP has supported efforts to reopen the Black Sea ports. We are working around the clock to transport wheat grain from Ukraine to countries in need, since an agreement was reached for such exports via the Black Sea, in July 2022. This also provides an important boost to Ukraine’s economy.

WFP emphasizes a localized approach, working through local partners, businesses, trade networks and institutions to support the Government and people of Ukraine.

What the World Food Programme is doing in Ukraine

Cash assistance
WFP is prioritizing cash assistance wherever banks are functioning and food is easily accessible. Cash assistance gives people the freedom to meet their essential needs as they choose, and stimulates local economies. WFP has distributed more than US$420 million in cash assistance to over 2 million people since March 2022. 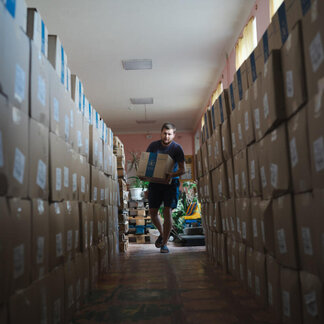 Social protection and safety nets
WFP is working closely with the Ministry of Social Policy to help improve the efficiency and transparency of the Unified Social Registry and make it easier for vulnerable people to request and access assistance from the State and international organizations alike. WFP will support daily hot meals in schools under the National School Feeding Programme, starting in 58 schools in the Kyiv region from January 2023. Economy
WFP continues to scale up the buying of food locally in Ukraine, while also contracting in-country businesses for its logistics work. Its cash transfers further help to stimulate trade and the local economy. 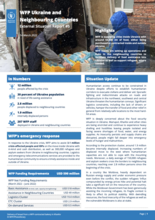 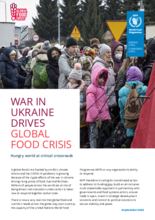 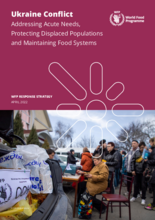 Projected increase in acute food insecurity due to war in Ukraine 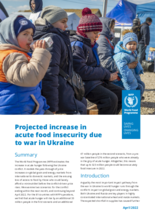 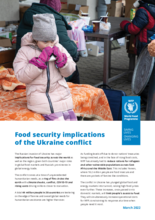 Near Ukraine's frontlines, food and friends ease icy months ahead

Find out more about the state of food security in Ukraine