KHARTOUM - The United Nations World Food Programme (WFP) today welcomed a contribution of €9 million (US$9.7 million) from the European Commission’s Humanitarian Aid and Civil Protection Department (ECHO) to its emergency operations in Sudan.

The funds will help WFP prevent hunger and treat malnutrition among the most vulnerable people in Sudan. WFP will use the contribution to provide life-saving food assistance to more than 152,000 displaced people in West and South Darfur for two months, as well as to more than 193,000 newly displaced people across Darfur for four months.  This includes people who were displaced in 2014 and have not been able to return home, in addition to those who have been displaced since January this year.

The contribution will also be used to buy Super Cereal Plus (a nutritious porridge) for the treatment of malnutrition in about 58,000 children aged under five, pregnant women and nursing mothers in the Darfur region and in the states of Kassala, Red Sea.

"The humanitarian situation in Sudan remains critical following years of conflict, natural disasters and underdevelopment. The response to acute malnutrition is one of the main strategic pillars of intervention of the European Commission in the country, with the purpose of saving the lives of children under the age of five,” said ECHO Head of Office in Khartoum Jeroen Uytterschaut. “The European Commission and the EU as a whole is among the main donors for humanitarian assistance in Sudan and thanks to our partnership with the World Food Programme, hundreds of thousands of Sudanese will continue receiving life-saving food aid.”

The EU is a major donor to WFP Sudan, providing €22.9 million in support of emergency operations from 2014 to 2015.  Since 2012, ECHO has contributed more than €67 million towards WFP’s emergency operations and a further €9.8 million towards the United Nations Humanitarian Air Service (UNHAS), managed by WFP, which provides safe and reliable passenger and light cargo services to the entire humanitarian community in Sudan.

“We are very grateful to ECHO for their continous support to WFP’s operations in Sudan.  This latest contribution will help us reach vulnerable groups in the country through both life-saving and nutritional asistance, especially during the lean season when food stocks are depleted and children and mothers in need could easily slide into malnutrition,” said WFP Sudan Country Director Adnan Khan.

In 2014, ECHO’s contribution enabled WFP to assist some 80,800 children, pregnant women and nursing mothers mostly in Kassala and Red Sea states. It also supported some 38,350 refugees in Kassala state, 149,500 vulnerable people in South Kordofan and another 35,000 internally displaced people in North Kordofan through food voucher programmes.

In 2015, WFP plans to assist 3.7 million people across Sudan, of whom 2.7 million live in the conflict-affected region of Darfur, internally displaced people in Blue Nile and South Kordofan, refugees in Kassala state and other food insecure vulnerable groups elswhere in the country. 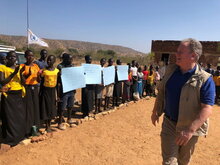