Nutrition and women's empowerment - a foundation for development in Sri Lanka

COLOMBO – The United Nations World Food Programme (WFP) and the United Nations Population Fund (UNFPA) in Sri Lanka embarked on a new joint project today to improve women’s nutrition and promote gender equality and women’s empowerment in Sri Lanka by providing critical information and services on sexual and reproductive health, nutrition and food security over the next year.

The project, which will assist communities in six districts - Monaragala, Matale, Mullaithivu, Mannar, Batticaloa, and Nuwara Eliya - focuses on the development of women entrepreneurs through initiatives aimed at enhancing their skills and boosting their income. In addition, the project will aim to improve access to sexual and reproductive health services which would enable the prevention of human rights violations such as gender-based violence.

Today this project is being launched as the two agencies commence celebrations linked to the annual global 16 days of Activism Against Gender-based Violence Campaign (November 25th to December 10th). Gender-based violence affects primarily women and girls in their reproductive years (15-49); thereby negatively affecting their sexual and reproductive health and rights, and reinforcing the cycle of poverty.

“UNFPA is delighted to start this new collaborative project with WFP, which looks at health and well-being of women and girls in a holistic way. Through this project, we aim to expand choices for women and girls in Sri Lanka, part of the efforts to leave no one behind,” said Ritsu Nacken, UNFPA Representative.

Despite Sri Lanka’s significant achievements in terms of overall health indicators, nutrition indicators continue to lag far behind. The country is facing a double burden of malnutrition with stagnant rates of undernutrition combined with growing numbers of overweight people and a rise in obesity rates. One in six children under the age of five are too thin for their height (wasting) indicating a critical public health situation, while almost one in six newborns have low birth weight. This indicates a vicious cycle of malnutrition and the need for improved maternal nutrition, including in urban settings where almost one in two women in reproductive age are either overweight or obese.

Substantial evidence demonstrates that better nourished girls are more likely to stay in school. If young people are also provided with comprehensive knowledge and access to services on sexual and reproductive health, they will be informed and empowered to protect themselves from human rights violations such as gender-based violence. Then it would unleash the potential of young people to make important contributions to the social and economic development of their communities and the country overall.

The joint project is thanks to a contribution to WFP by the Government of Denmark (USD 458,000; LKR 81.9 million). The initiative will be executed in close cooperation with the Ministry of Health, Nutrition and Indigenous Medicine.

The United Nations Population Fund is the UN’s sexual and reproductive health agency striving to deliver a world where every pregnancy is wanted, every childbirth is safe and every young person’s potential is fulfilled. 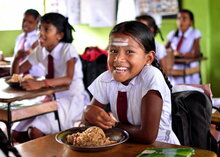