TUNIS – The United Nations World Food Progamme (WFP) has resumed food assistance to support displaced people whose lives have been impacted by the continuing armed conflict in Libya.

WFP is currently providing assistance for 51,000 of the most vulnerable Libyans who have been displaced in the west of the country. Through its partner, Shaikh Tahir Azzawi Charity Organization (STACO), WFP is providing pasta, couscous, rice, and other items to affected families in towns including Wadi ash-Shati, Misrata, Sebha and Traghen.

“The violence and insecurity in Libya is continuing unabated and has led to massive population displacements and an increase in humanitarian needs,” said Wagdi Othman, WFP Emergency Coordinator for Libya. “As thousands of vulnerable people are displaced now, WFP is doing its utmost to support those people who have been left without sufficient access to food supplies.”

WFP plans to support a total of 243,000 internally displaced people in Libya with life-saving food assistance over the next six months.  So far, 10 trucks have crossed the Tunisian border carrying food to STACO’s warehouse in western Libya for onward distribution.

The food agency is establishing a partnership with another Libyan charity to conduct food distributions to families who have left their homes in eastern Libya, especially Benghazi, Libya’s second largest city, which has been hard hit by conflict for more than a year.  WFP plans to begin food distributions in the east in the coming days.

Since the beginning of this year WFP has reached 75,000 people throughout Libya with food assistance, but distributions were suspended in March and April due to lack of funding. With WFP’s emergency operation in Libya only 33 percent funded, the organization needs to raise an additional US$14 million to ensure that its operation inside Libya continues uninterrupted.

Study will gauge COVID-19’s impact on food security among women in rural areas in Tunisia. 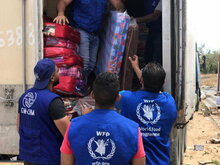