The principle is simple: give what you can – whether it’s one meal or one year of meals – and know that it makes a difference.

In US dollars, a meal supplied by the United Nations World Food Programme (WFP) costs around 80 cents – less than the price of a cup of coffee.

It’s no wonder that since its launch in 2015, ShareTheMeal’s come such a long way. In July, the official donation app of WFP reached a milestone: 150 million meals served – welcome news as WFP responds to the record hunger of 2022.

This year WFP aims to reach 152 million people and is calling for US$22.2 billion to do so – with as many as 828 million people around the world who go to bed hungry every night, every penny counts.

The app allows users to seamlessly donate life-saving food to children and families around the world. By choosing a goal (from Yemen to Sri Lanka and more) and giving as little as US$0.80, users help fund school feeding initiatives, nutrition support, resilience building, sustainable livelihoods and emergency assistance.

With a community of millions of users (spanning over 200 countries, in 14 languages and 52 currencies), 105 goals complete, and now  a 150 million meal milestone, let’s take a look at ShareTheMeal’s impact over the years:

ShareTheMeal’s first ever goal was in Lesotho. The goal set out to feed pre-primary school children during their education.

The pilot attracted 52,000 users across Germany, Austria and Switzerland, who raised over 1 million meals. The donations provided children with tasty and nutritious school meals that fuelled their learning and development.

2016: supporting children and mothers in Syria

Following the success of Lesotho and the global launch of the first Syria campaign in November 2015, which helped Syrian refugees in Jordan, ShareTheMeal launched another campaign in Syria addressing a very important issue.

Due to the conflict and increasing food prices, malnutrition rates also rose which was particularly dangerous for mothers and children. The more than 1 million shared meals raised supported pregnant women and nursing mothers and their children to boost their nutrition with meat, dairy, fresh fruit and vegetables.

In 2018, The Table was created as a new subscription feature on the app where monthly subscribers were connected with their impact. A ‘give monthly’ feature was technically available from 2016, but The Table took that concept and offered users updates, photos, videos and personal stories from the field.

Although The Table has been discontinued, users are still able to give monthly donations and see just how much their donations are helping.

The explosion that devastated Lebanon’s capital, Beirut, in August 2020, left thousands of people injured and homeless. WFP immediately responded by providing vulnerable families with food parcels and emergency support to help them get back on their feet.

ShareTheMeal set up a campaign within 48 hours of the event occurring to support WFP’s efforts. The shared meals helped people like Fatima (pictured) to feed her family. As the pressure to buy food was alleviated, people were able to spend their money on more essential items. “Instead of buying beans, I’m now buying detergents and medicine,” said Fatima.

In the same year, ShareTheMeal won the “App for Good” category” in Google’s “Best apps of 2020” awards. It also made Apple’s “Best of 2020” in the category “Trend of the Year: Making a Difference”.

In March 2021, ShareTheMeal reached its 100 million meal milestone! The team had grown from just two – Bernhard Kowatsch and Sebastian Stricker (Co-Founders) in 2015 – to 25, all working together with the ShareTheMeal community to reach a zero-hunger world.

As the organization celebrates their 150 million meal milestone just over a year later, the future can only look brighter. 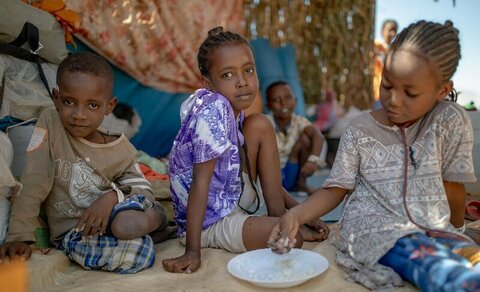 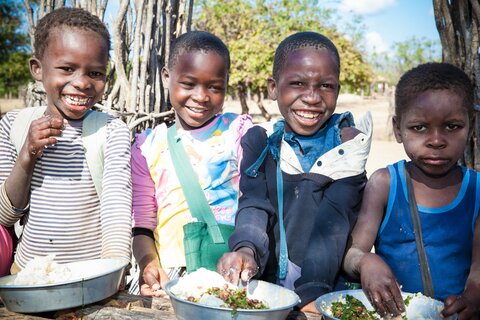