In the northern region of Tigray, Aster and her husband rely on World Food Programme support to survive — with the risk of famine imminent for some 350,000 people, WFP is calling for funds to assist 2.1 million
24 June 2021, By Claire Nevill
Conflicts Emergencies Food Security Funding Nutrition Ethiopia

It was 9am on a Saturday in late March when Aster, a mother of seven, turned from her kitchen stove to the horrifying sight of the bedroom she shared with her husband being set on fire.

She doesn’t remember much after that, except the smoke billowing through her home of 18 years.

Like any mother, Aster’s first thought was her children.

“I told them to run,” she says. “We all did at once. And as I looked back, I couldn’t believe my eyes. Our home was burning to the ground.”

Three of the children ran as far as Shire, some 50km away, to safety. Aster has not seen them since.

When I meet her two months later, Aster is sitting on a huge piece of rubble amid the heaps of jet black ash — all that remains of her home of 18 years. “After we escaped, I had nightmares about my house and flashbacks of [how it was] it before it was burnt,” she says.

A teaspoon glistening in the sunshine is all that remains of the family’s belongings, and a cruel reminder of everything they lost that day. Their house and crops went up in flames, cattle and goats were looted.

“I am scared and filled with sadness because my children are not with me,” she says. “They are all over the place and have been on the road for some time. I don’t know how they are.”

Before the current, bitter conflict began in November, life in the hilltop village of Adi Millen was very different, she says.

“We were rich, with enough food to eat and sell in the market, we had four rooms in our house, but now we are left with only the ashes. We cannot sleep like we used to.” And then there is the persistent fear of “them” coming back at any time.

Adi Millen is set atop one of a thousand hills rolling across the northwestern zone of Tigray, Ethiopia’s northern province.

Usually at this time of year in this region of farmers, where people depend on teff, sesame, wheat, and millet crops to feed themselves, the meher — May to September planting season — is in full swing.

Aster’s millet and teff fields were destroyed in the fire and, since she and her husband currently have no current means of earning a living, they can’t afford seeds or fertilizer to plant crops again. Countless others face a similar situation or are simply too terrified go out to the fields because of the risk of being attacked and killed.

As it becomes clearer and clearer that this agricultural season is lost, tragedy beckons for millions of Tigrayans.

It is families like Aster’s, tucked away in the rural areas of the northern, central and western zones of the region, who are most at risk of famine. The World Food Programme (WFP) came just in time last month and drove four trucks of wheat, oil and pulses up the hill to support 4,500 people in Adi Millen for the next month.

As volunteers tossed 50kg sacks of food off the back of the trucks, the village exploded into life — food being loaded onto donkeys, camels and carts; women gossiping under colourful parasols and headscarves; men holding each other’s hands tightly, and neighbours reuniting in a safe space.

“Up until now, I have relied on what little food I could get from my neighbours,” says Aster. “At least now we have some relief from the hunger we have been suffering”. She adds: “I am glad that WFP was able to bring the food to us here in Adi Millen, where we are far and cut off from many towns and markets.”

She and two of her elder sons are borrowing a neighbour’s donkey and cart for the day. Loaded with five bags of WFP food, it winds its way up to the top of the hill.

According to the latest figures, the risk of famine will rise unless food and livelihood assistance is scaled up further, humanitarians have full access to all areas, and, crucially, hostilities cease. A total of 350,000 people in Tigray region are at level 5 or ‘catastrophe’ on the Integrated Food Security Phase Classification.

Even before the current conflict, some parts of Tigray were teetering on the edge of hunger, with 1.6 million people already relying on food assistance, despite the region’s enormous agricultural potential. Frequent weather shocks, desert locusts and rising inflation were already putting a strain on most families.

Then the conflict came, clashing with the peak harvest, wiping out employment and incomes, and disrupting markets and access to cash and fuel.

WFP has deployed more than 180 staff and swiftly mounted its emergency food assistance operation in Tigray, distributing wheat, split peas and vegetable oil to 1.4 million people and delivering 355,000 emergency nutrition rations to children and women. However, the organization is still far from reaching its target of 2.1 million. Time is running out and full, unfettered humanitarian access for WFP and partners is essential right now  —  by the time famine is declared it will be too late.

Aster is desperately waiting to see her three children again. Her husband and sons have started collecting masonry to rebuild their house and the entire family are hoping peace will bring an end to their sleepless nights. Until then, Aster says, “We need to stay alive. That is all for now.”

WFP is grateful to Canada, Germany, Japan, the Republic of Korea, Luxemburg, Norway, the UK and US for funding the immediate response. The organization needs an additional US$203 million to meet the nutritional needs of at least 2.1 million people in desperate need.

Donate to the World Food Programme 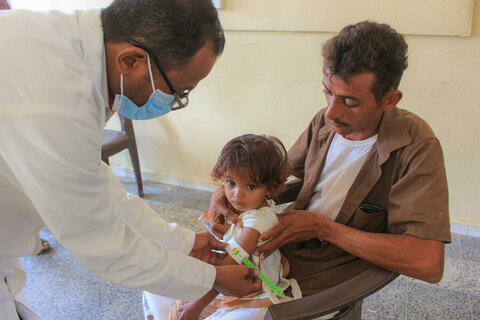 Q&A: ‘Why do people have to die before a famine is declared?’