The World Food Programme has won the Nobel Prize for Peace, it was announced today.

"Every one of the 690 million hungry people in the world today has the right to live peacefully and without hunger," said WFP's Executive Director David Beasley, in a statement.

"Today, the Norwegian Nobel Committee has turned the global spotlight on them and on the devastating consequences of conflict." 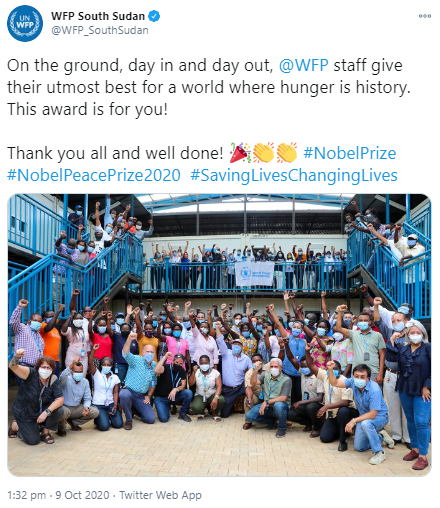 He added: "Climate shocks and economic pressures have further compounded their plight. And now, a global pandemic with its brutal impact on economies and communities, is pushing millions more to the brink of starvation."

In a video message on Twitter, Beasley — who is currently in Niger — paid tribute to WFP staff. "They're out there in the most difficult, complex places in the world, whether there's war, conflict, climate extremes, it doesn't matter," he said. "They're out there, and they deserve this award." 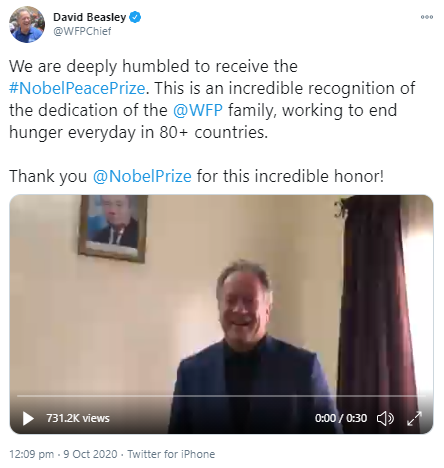 Beasley also added that the Nobel Peace Prize is "poignant tribute to our WFP team members who have made the ultimate sacrifice on the front lines of hunger".

However, the win was "not WFP's alone", Beasley said: "We work closely with governments, local and international organizations and private sector partners whose passion for helping the hungry and vulnerable equals ours. We could not possibly help anyone without them."

WFP, the world's biggest humanitarian organization, warned earlier this year that COVID-19 could result in a "hunger pandemic" as coronavirus wreaked havoc with supply chains, disrupting the movements of critical food assistance, personnel and critical equipment.

The Rome-based UN agency said that acute hunger in the 88 countries in which it operates could reach 270 million people by the end of the year — an 82 percent increase on 2019.

In spite of funding shortages, the organization has persevered, working to fend off famine in hunger hotspots such as Yemen, South Sudan, the Democratic Republic of Congo — places beset by the intersecting threats of conflict, climate change and now coronavirus.

Last year, WFP reached a record 97 million people with food assistance. In June it issued a call for US$4.9 billion to reach up to 138 million people.

Bearing witness to how hunger and conflict feed each other in dozens of countries, WFP has always been an advocate for the critical role peace has in ending hunger, and for the use of food as a tool for peace.

Three experts discuss the significance of UN Security Council resolution 2417 and cast a look at hunger, peace and…

In 2018, the global community explicitly recognized the formal link between hunger and conflict for the first time through UN Security Council Resolution 2417.

Beasley added: "The Nobel Peace Prize should inspire all of us to work even harder, to continue to save lives, change lives and reach that Zero Hunger goal."