Across the world, smallholder farmers produce much of the food that lands on people’s plates – feeding up to 80 percent of Asia and Sub-Saharan Africa.

Yet for most, going beyond mere subsistence is an uphill struggle. Exposed to extreme weather phenomena brought on by climate change and to progressive land degradation, they lack the means to invest in productive, sustainable farming methods.

The use of traditional, often rudimentary, storage leaves crops at the mercy of pests, and vulnerable to heat and humidity. The loss of harvested crops – which can reach 30 percent in sub-Saharan Africa – means a loss of income. It also means wasting all the valuable resources – land, water, labour– invested in their production.

Crucially, access to formal markets – which could be an incentive for smallholder farmers to invest in their business – remains elusive for reasons that include low production and productivity, as well as structural deficiencies such as lack of transport and infrastructure.

As the world’s leading humanitarian agency, the World Food Programme (WFP) is a major buyer of staple food – some 80 percent of which comes from developing countries – for a cash value of over US$ 1 billion a year. By adopting smallholder-friendly procurement, WFP contributes to strengthening local economies and supporting the increased resilience and productivity of rural communities – one of the pillars of its hunger eradication strategy.

Through the Purchase for Progress (P4P) programme, WFP – which itself has pledged to source 10 percent of its food purchases from smallholder farmers – encourages national governments and the private sector to buy food in ways that benefit smallholders.

On the supply side, P4P works with a variety of partners to promote smallholder farmers’ entrepreneurship as a way to build resilience and address long-term nutrition needs. Working mainly with farmers’ organizations and other partners, P4P provides training and assets to improve crop quality, facilitates access to finance and promotes marketing. Women, whose role in farming is often unpaid and labour-intensive, are particularly encouraged to take part in decision-making and benefit economically from their work.

Over the years, P4P has expanded to some 35 countries, and helped transform the way more than one million smallholder farmers in Africa, Latin America and (to a lesser extent) Asia interact with markets.

Examples of how P4P is changing people’s lives abound. Zambian farmer Harriet Chabala has increased her production of beans by 50 percent over two years. In recognition of her entrepreneurial skills and consistent supply to WFP for three consecutive marketing seasons, she received an equipment loan from her local cooperative for a tricycle. The tricycle can navigate poor quality roads, enabling Harriet to provide transport services to move crops and people to and from towns and markets. She is planning to repay her loan in just one year, instead of the three she had agreed on. The benefits of P4P are clearly visible in her village: farmers have replaced grass roofing with metal sheeting, and today there are three cars and more than 10 motorbikes where previously there were none.

P4P’s experience demonstrates the role that demand-driven, pro-smallholder procurement can play in addressing nutritional and other development challenges; building stronger markets; lifting rural communities out of poverty; and contributing to Sustainable Development Goals 2 (eradication of hunger) and 15 (responsible consumption and production).

1 million
farmers changed the way they engage with markets thanks to P4P
600,000
metric tons of food were purchased directly from smallholder farmers through P4P 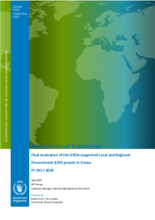 DR Congo - No time to turn away 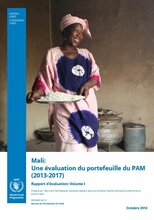 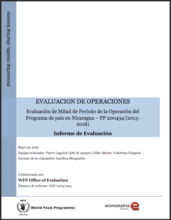 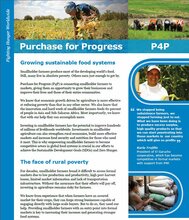