World Food Programme aims to make staying in hometowns a better option than risking exploitation in the goldmines of the north
28 May 2021, By María Gallar Sánchez
Refugees and migration Chad

In the provinces of central Chad migrating is, by tradition, less a last resort than a way of life. For centuries, during the dry season, herdsmen have made for the wetlands and pastures around Lake Chad and in the south of the country.

When the rains came, they crossed into areas that now fall within the borders of neighbouring countries, to sell their cattle at higher prices.

Moving around is no longer so easy, however, with borders being closed to contain armed groups that thrive in the margins of the country.

There are also tensions between herders and farmers, sparked by concerns over things such as dry pastures, when and how much it will rain.

Livestock — camels and cows — still need to eat and drink, however, and they manage to do so in the lands of sedentary farmers across the Sahel, that vast strip of Africa that runs south of the Sahara Desert between the Atlantic Ocean and the Red Sea.

With no jobs, and clashes over resources, leaving is the only option for many; young men venture into the desert, to the unruly north, attracted by the prospect of a job in the mines.

World Food Programme partnerships officer Krystyna Kovalenko offers a glimpse of the south of the country, where thousands of people are starving

For Chad, a landlocked country of 16.4 million people — where the World Food Programme provides assistance to 2.4 million — is a gold producer. Outlaws, traffickers and non-state armed groups that control the mines are able to recruit hopeless men, some of whom venture further north still, into Libya.

'I sent money to my parents every month, but it was only enough to buy a few bars of soap'

“We were 22 men in a pickup truck and we only had one meal per day. We frequently got hit by officers at roadblocks, but they allowed us through. They are in league with the traffickers.”

Amine made it to the town of Zawiya, on the Libyan coast, where he worked for eight months in a shop. He could not earn enough to cross the Mediterranean and decided to travel back to Chad, where his family was waiting for him.

He now supports the joint efforts by the International Organization for Migration and the World Food Programme (WFP) to both raise awareness on the risks of migrating and to promote economic opportunities in the Sahel.

“In the Batha province there is only one harvest per year, which is sometimes lost due to flash floods. When someone comes and tells a peasant that he can find a job in the north, he doesn’t think too much about it — he goes into debt and leaves,” says Amine. “I tell other men about the dangers I encountered, but to keep them here they need training and employment.”

“We are aware of the dangers but take the risk of leaving anyway,” says Yacoub, a 30-year old man who worked for three years in the illegal gold mines of Chad’s Tibesti region, in the far northwest of the country, with two friends. “I know someone who earned 80 million francs [around US$150,000] and that inspired us to go and try too,” he adds.

His companions crossed into Libya and he has not heard from them since. “My father had advised me against going further north so when my friends left, I was alone and came back home,” he says.

Yacoub wanted to take care of his aging parents and to start a family of his own, but his province, Guéra, is prone to food shortages and there are no decent jobs for rural youth. “Before panning for gold in Tibesti, I had worked as a baker and as a construction labourer,” he says. “I sent money to my parents every month, but it was only enough to buy a few bars of soap.”

Once back from the mine, he feared he might become yet another mouth for his family to feed.

“The village was different when I returned — people had organized themselves to produce food, plant trees and renew houses,” he explains. “If they can grow food to eat and sell, then they don’t need to risk their lives up in the north. They can stay here.”

Yacoub’s homeplace is one of more than 200 villages in Chad where WFP works to empower people to become self-reliant. By ensuring sufficient availability of resources, such as food, water and firewood, WFP lays the foundations for income-generating activities, saving people from risking their lives by migrating.

In the west of the country, meeting people from the Kanembou community means venturing off-road into white-sand landscapes dotted with small oases. Known as ouaddis, these solitary oases are the only source of life in the backyard of Lake Chad.

Adam is watering some maize plants in the ouaddi of Koumbagri, not far from the town of Mao, where women sell the yield every week in the market.

“Me and some of my relatives have been several times to the north,” he says. “Up there, you are an easy target for all kinds of criminals and life is extremely harsh. You work long hours under the sun, it’s hot” — temperatures sometimes exceed 45 degrees Celsius — “and there is little water to drink.”

Ali Abderahman, the local traditional leader who owns the ouaddi and has loaned it to the community for an initial period of five years, leans on his cane: “I have been here more than 60 years and this is the first time that all our men are here. They are back because they can exploit the ouaddi. By working all together, we are able to produce more and we grow new foods, which have higher prices and good demand in the local market,” he explains.

“We all need to make robust investments to address the structural causes of hunger and malnutrition in the Sahel. It is important to ensure that families are able to meet their essential needs by themselves and that young people can envision a future,” says Claude Jibidar, Country Director for WFP in Chad. “If we fail to do this, we will continue to face frequent food crises, conflict will escalate and more people will make the journey north, risking their lives in the desert. This would be most dangerous in the midst of Chad’s political transition, and we must not allow it to happen.” 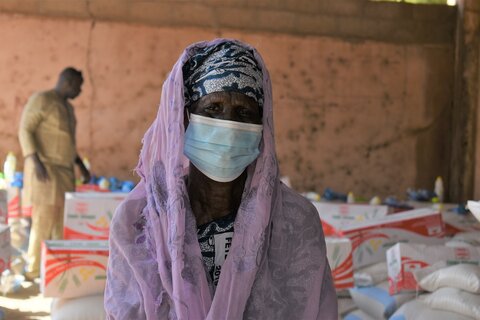